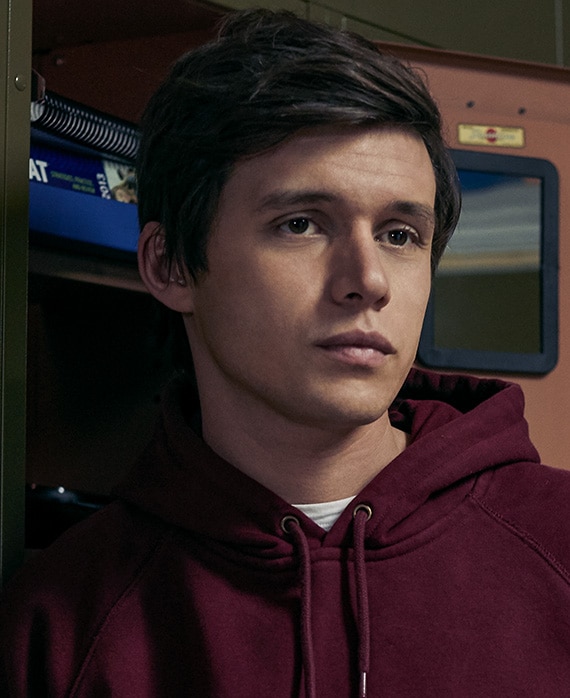 "Eric Walker," portrayed by Nick Robinson, is a kind-eyed, charming high schooler with something to prove. As a middle-class kid attending a school mainly populated by more affluent students, he often finds the pressures of life and school are different for him than his friends.

Robinson continues to solidify his stature as a talented, charismatic, young leading man across various genres in film, television and Broadway.

Making his Broadway debut, Robinson recently completed a starring run as “Jem Finch” in Aaron Sorkin’s adaptation of To Kill a Mockingbird opposite Ed Harris.

In a career-establishing performance and role, Robinson starred in the romantic teen comedy Love, Simon as “Simon Spiers,” a gay teenager forced to come out after he is blackmailed by a classmate. Robinson reprised the role in the film’s television sequel Love, Victor which debuted on Hulu in June 2020.

Robinson’s upcoming projects include Echo Boomers, a crime drama based on a true story, opposite Michael Shannon, Britt Robertson and Alex Pettyfer, the film adaptation of Francesca Lia Block’s cult favorite 1980s novel Weetzie Bat, Silk Road opposite Jimmi Simpson and Jason Clarke, the big screen adaptation of The New York Times best-selling novel of the same name, The Language of Flowers alongside Kiersy Clemons, as well as A Shadow in the Cloud, the story of a female WWII pilot who encounters a dark presence onboard, opposite Chloë Grace Moretz.

In 2019, Robinson starred in the period drama Native Son, the story follows a young African American man coming-of-age in the 1930s. Robinson also starred in the thriller Strange But True which follows a woman who, five years after the tragic death of her boyfriend, arrives at the doorsteps of his family to tell them she is pregnant with his child.

In 2018, Robinson played the lead in the indie coming-of-age drama Krystal starring opposite Rosario Dawson. Directed by William H. Macy, the story follows a sheltered young man who develops a crush on a stripper.

In 2017, Robinson starred in the romantic drama Everything, Everything opposite Amandla Sternberg, which centers on a girl confined to her own home due to immunodeficiency and severe allergies whose life begins to change when she falls in love with the boy next door.

In 2016, Robinson starred as “Ben Parish” in the young adult sci-fi feature The 5th Wave opposite Chloë Grace Moretz, Alex Roe and Liev Schreiber. The film, adapted from The New York Times best-selling novel, is set in the post-apocalyptic world that’s suffering from deadly attacks against Earth’s population. That same year, Robinson starred in the title role of Rob Reiner’s drama Being Charlie which premiered at the 2015 Toronto International Film Festival.

In 2015, Robinson starred in the 4th installment of the Jurassic Park series, Jurassic World as “Zach,” nephew to Bryce Dallas Howard’s character, who visited the dinosaur theme park 22-years after the incidents in the original film. The film grossed $1.67 billion worldwide making it one of the highest grossing films of all time.

Robinson was a standout at the 2013 Sundance Film Festival, garnering attention for his starring role as “Joe Toy” in The Kings of Summer. The Wall Street Journal tapped him as one of the “five breakouts from this year’s festival we’ll be hearing a lot about in the coming months,” while The Hollywood Reporter singled out his performance as being “especially good, providing the film with a tender heart.” Robinson also guest starred in the critically acclaimed HBO drama Boardwalk Empire. His first professional job came in 2010 when he was cast in Melissa and Joey as “Ryder.”

A Seattle native, after winning praise in several local productions including To Kill a Mockingbird, Mame, A Thousand Clowns and Lost in Yonkers, Robinson relocated with his family to Los Angeles to pursue acting. He currently resides in Los Angeles.