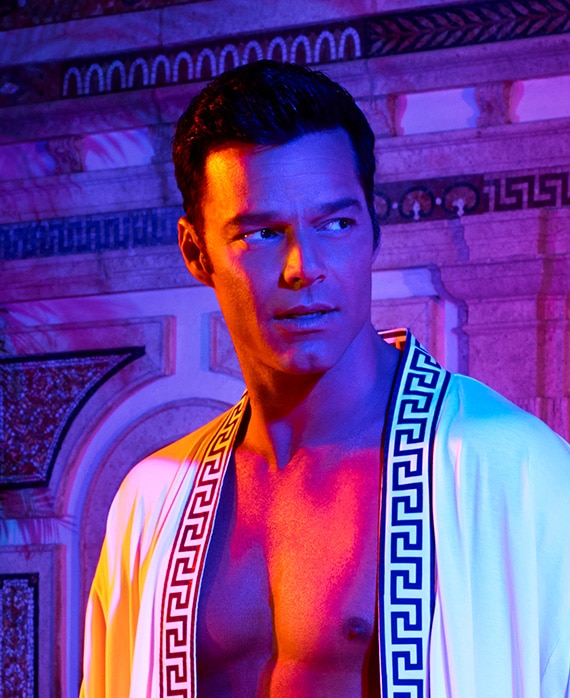 Both a Grammy® and multiple Latin Grammy winner, Ricky Martin is the leading Latin music figure of his generation. Following his stint in pop group Menudo, Ricky Martin set off on his own musical path with the 1991 release of his self-titled debut solo album. With his first two albums quickly establishing Martin as a superstar throughout the Spanish-speaking world, he then made acting appearances in General Hospital and a Broadway run in Les Miserables. With the success of singles such as “Maria” and the 1998 World Cup Anthem “La Copa de la Vida” (“The Cup of Life”), Martin vaulted to the level of global superstar and led an oncoming cultural revolution.

Declared “an international pop icon and Latin Music’s Global Ambassador” by Billboard and recognized by the Latin Recording Academy as its youngest-ever “Person of the Year” honoree, Martin has now sold over 70 million albums and continues to perform to sold-out stadium and arena audiences throughout the world. Martin has been the recipient of dozens of prestigious international awards saluting both his career achievements and far-reaching philanthropic efforts.

Martin debuted on The New York Times Bestseller list with the Fall 2010 release of his highly praised autobiography ME, and continued with the chart-topping success of his twelfth album “Musica+Alma+Sexo” in the spring of 2011. In 2012, Martin appeared as a guest star on FOX’s Glee and in the Broadway revival of Evita. He signed on as one of the coaches of “The Voice Australia.”

Martin released his first children’s book Santiago the Dreamer in Land Among the Stars in November 2013. That same month, Martin launched PiccoloUniverse.com, a multi-language web site that offers a place where mothers, parents and people can get advice and share the joys and the challenges they face every day raising children.

During the summer of 2014, Martin launched his television special SuperSong on Crackle. In 2015, Martin teamed up with producer Simon Cowell and Saban Brands as a judge and executive producer of Univision Network’s music competition show La Banda.

His 10th studio album, A Quien Quiera Escuchar, was released in February 2015 debuting at No. 1 on U.S. and Puerto Rico album charts. The album was nominated for 2015 Latin Grammy® Awards in “Best Contemporary Pop Vocal Album.”

Martin performed his 2017 “All In” Las Vegas residency at The Park Theatre at the Monte Carlo Resort and Casino. He continues to dedicate himself to the efforts of The Ricky Martin Foundation, an organization that advocates for the well-being of children around the globe in critical areas such as social justice, education and health. Learn more at: http://www.rickymartinfoundation.org