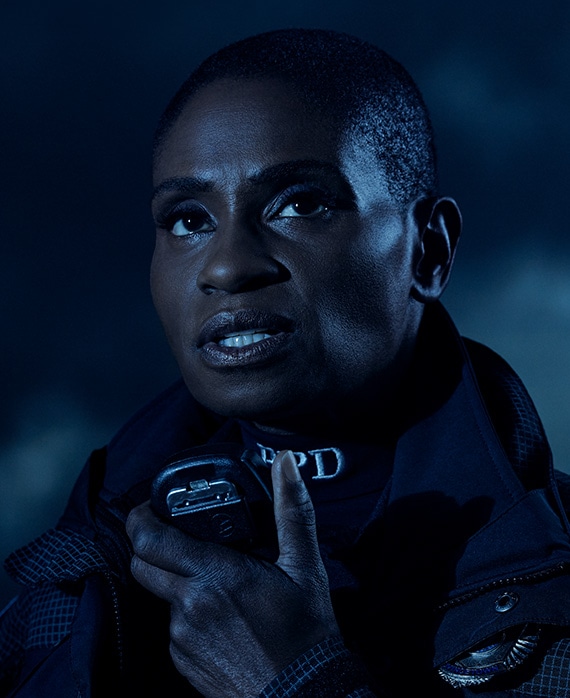 Porter has made her mark in all areas of entertainment: television, film and theater. Porter garnered a 2018 Emmy® nomination for her role of “Beverly Hope” in American Horror Story: Cult. She has appeared in five of the series iterations, with her first appearance in the franchise as a guest star in the original American Horror Story: Murder House.

Porter recently completed her role of “Indra” on the seventh and final season of CW’s post-apocalyptic The 100, while working simultaneously on the Netflix hit Outer Banks. She continues appearing in Apple TV+’s The Morning Show as “Attorney Sarah Graveler.” Other recurring roles include Showtime’s Ray Donovan and the heroic “Pearly Mae” in period piece Underground.

Porter is known for seven seasons as “Lettie Mae Thornton” in HBO’s cornerstone series True Blood. Viewers will also recognize her as “Kendra James” from Aaron Sorkin’s HBO drama The Newsroom and leader of the Guilty Remnant in The Leftovers, which marked Porter’s sixth venture with HBO, along with memorable performances in HBO films Lackawanna Blues and Gia. Porter has worked in pivotal roles on numerous TV series including: Code Black, The Catch, Glee, Grey’s Anatomy, American Dreams, C.S.I., The Vampire Diaries, Law & Order: SVU, Private Practice and House, among many others. Porter was seen alongside Emily Mortimer in the film Wig Shop. Additional film credits include the multi-award-winning The Social Network, Miss Virginia, The Last Word, The Peacemaker, About Sunny and others.

Porter made her Broadway debut in The Women, directed by Scott Elliot. This was her second project with Elliot, having collaborated with him at The Williamstown Theatre Festival in Arthur Miller’s A Ride Down Mt. Morgan. Porter is grateful to have worked with some of the country’s best stage directors: George C. Wolfe, Lisa Peterson, Mark Wing-Davey, Richard Foreman, Don Scardino, Michael Grief and Risa Bramon Garcia. Other theater credits include Beth Henley’s The Debutante Ball at Manhattan Theatre Club, numerous plays at the New York Shakespeare Festival, most notably her Obie Award-winning performance in Venus, written by Suzan-Lori Parks.

Porter was born and raised in New York City. She attended SUNY Purchase and the famed High School for the Performing Arts. Porter splits her time between Los Angeles and New York City. She has two children and is figuring out “homeschooling.”