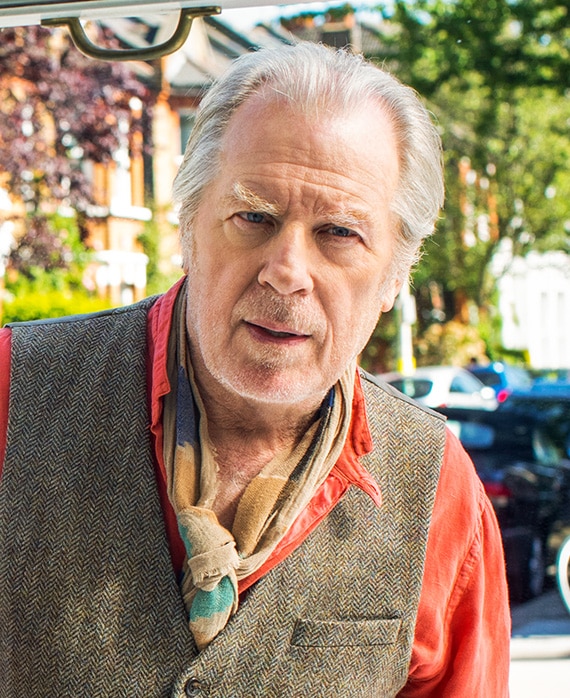 A restless and nomadic adventurer, "Michael," portrayed by Michael McKean, has gotten by on his charm and charisma. But now, he’s ended up with nothing and must rely on his daughter, Ally, to house and feed him.

McKean studied acting at Carnegie Mellon University and NYU before he joined Harry Shearer and David L. Lander in the satirical troupe The Credibility Gap. With razor-sharpness and precision depth, The Credibility Gap’s cutting commentaries skewered the status quo for a generation. In 1976, McKean and Lander landed star-making roles on the hit ABC TV show Laverne and Shirley, cracking up America as “Lenny” and “Squiggy.”

McKean, along with his wife Annette O’Toole, curated the From Stage to Screen spotlight film series. While McKean notched early motion picture credits including Steven Spielberg’s 1941, Robert Zemeckis’ Used Cars, and Garry Marshall’s Young Doctors in Love, it was Rob Reiner’s groundbreaking 1984 film This is Spinal Tap, on which McKean shared starring, screenwriting and composing duties, that gave him an appropriately sized canvas for his talent. This is Spinal Tap not only wowed critics and audiences the world over, it was honored at the 2019 Tribeca Film Festival. The film helped McKean forge a creative partnership with co-star and co-writer Christopher Guest and the pair went on to elevate the “mockumentary” genre in such contemporary classics as Best in Show, A Mighty Wind and For Your Consideration. For 2003’s A Mighty Wind, McKean not only co-starred as veteran folk singer Jerry Palter, he also co-wrote the Oscar-nominated song, “A Kiss at the End of the Rainbow.” He also collaborated with Guest and Eugene Levy on the film’s title song, “A Mighty Wind,” which earned a Grammy Award.

Other film appearances include The Big Picture, which he co-wrote, Clue, Light of Day, Planes, Trains and Automobiles, Earth Girls Are Easy, Coneheads, The Brady Bunch Movie, Jack, True Crime, Auto Focus, The Producers, Whatever Works and The Meddler.

On stage, McKean recently joined Edie Falco in The True and Laura Linney, Cynthia Nixon and Richard Thomas, in a new revival of the classic Lillian Hellman play The Little Foxes. McKean made his Broadway debut in 1990 with Rupert Holmes’ Accomplice, which netted him a Theater World Award. He made his Broadway musical debut in Hairspray, followed by Woody Allen’s original stage production A Secondhand Memory and a Williamstown Theatre Festival production of Tom Stoppard’s On the Razzle. Broadway credits include the 2005 revival of The Pajama Game, Gore Vidal’s The Best Man and Tracy Letts’ Superior Donuts, reprising the role of “Arthur Przybyszewski” he originated at Chicago’s famed Steppenwolf Theatre. Additional stage credits include All The Way with Bryan Cranston, Yes, Prime Minister, Randy Newman's musical Harps and Angels and Father Comes Home From the Wars (Parts I, II & III).