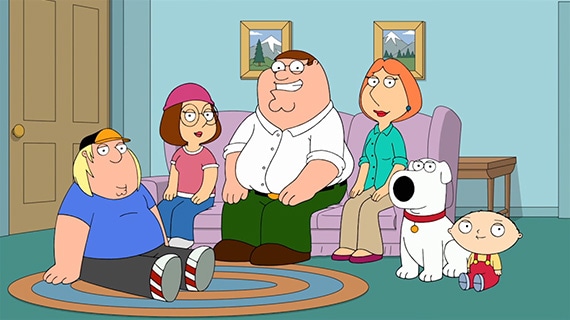 The animated sitcom, Family Guy, entertains its die-hard fan base with razor-sharp humor, spot-on parodies, spectacular animation and orchestra-backed original music. Since its debut in 1999, the series has reached cult status among fans, and its breakout star, a talking baby, has become one of the greatest TV characters of all time.

"No Giggity, No Doubt"

No Giggity, No Doubt

Quagmire finds his daughter at the high school prom he was chaperoning and surprises the gang when he decides to take his role as a father seriously, which leads to an ill-fated father-daughter camping trip with Peter and Meg.

Quagmire, Joe and Cleveland work together to help Peter take his health more seriously in the wake of a certain mishap at work.

Peter faces an unexpected event and important lesson after he is inadvertently identified as a transgender person.

Brain becomes concerned about the legacy that he could leave behind and Stewie creates a robotic duplicate to serve as a living biography.

Peter is given the position of the next White House Press Secretary and the Griffin family gets ready to make a move to Washington, D.C.

After Peter's hair turns white from a ghost-hunting adventure, his new look grabs the attention of a local news anchor; Brian and Stewie attempt to help Chris improve his dating game.

Two new bosses are brought into the Pawtucket Brewery team and they are immediately determined to use another mascot for the company, which leads to a heated competition between Peter and Brian to be the brewery's new face.

Stewie and Brian compete against each other over a wealthy heiress' inheritance; Peter and Chris fight each other for the affection of Mr. Herbert.

In an attempt to surprise the Griffin family, Meg successfully manages to get into the U.S. Olympic team as a biathlete and prepares for the Winter Games.

Stewie makes a personal promise to Meg to offer her better life after she is able to save him from a choking incident that could have cost him his life; Chris is forced to get ready to begin attending a vocational school.

Carter Pewterschmidt decides to give Lois an unexpected present for her upcoming birthday, but soon after he is the victim of an unfortunate accident that forces him to be left completely dependent on the Griffins for care and rehabilitation.

After Brian teases Stewie for being small, Stewie invents a shrinking machine that results in both of them shrinking to a microscopic size.

Stewie is surprised when he makes friends with another boy his age, but later taken aback when he learns that Stewie wasn't invited to his birthday party.

Brian comes to realize that his original assumption of marriage with Jess does not quite match up with the reality of the situation.

Brian meets a woman whom he quickly falls in love with, but she receives some devastating information about her cancer diagnosis.