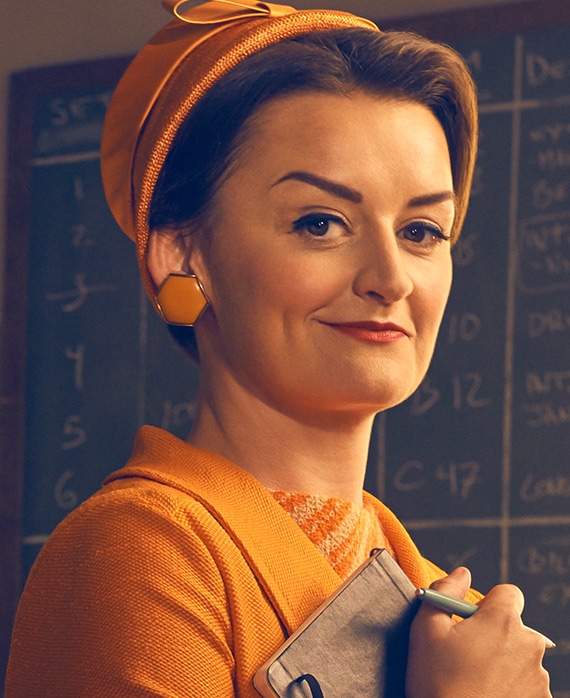 In addition, Wright recurs opposite Bryan Cranston and Giovanni Ribisi in Amazon’s new series Sneaky Pete which premiered January 13th. Pete revolves around a con man, “Marius” (Ribisi), who after leaving prison, takes cover from his past by assuming the identity of his cellmate, “Pete.” He moves in with “Pete's” long-estranged, unsuspecting family and is roped into the family's bail bond business.

2016 proved to be a breakout year for the British actress who landed herself on numerous critics list as one of the Best Performers of 2016 for her role as FBI secretary “Martha Hanson” on FX’s The Americans. Introduced in the first season as “Martha,” an unsuspecting FBI secretary seduced by KGB agent “Philip Jennings” (Matthew Rhys), her role deepened and expanded over four seasons. Where she once seemed to be a minor character intended to facilitate the plot –“Martha” became the heart of the show in season four, with fans and critics applauding Wright’s heart wrenching performance. Wright also starred in the HBO film Confirmation which detailed the Supreme Court hearings for “Clarence Thomas” (Wendell Pierce) that were rocked by testimony by Oklahoma law professor “Anita Hill” (Kerry Washington). Wright played “Virginia Thomas,” Clarence Thomas' attorney/lobbyist wife, who stuck by his side throughout the scandal. Most recently, she played a pivotal role in the Gavin O’Connor-Ben Affleck film The Accountant.

Additional film credits include roles in The Nanny Diaries with Scarlett Johansson, Nights, and Braains! and she has also appeared in the CBS series Blue Bloods, opposite Donnie Wahlberg. On stage, Wright is best known for her roles in the Off-Broadway production of The New Group’s Marie & Bruce (opposite Marisa Tomei) and Rafta Rafta, as well as regional performances in Educating Rita, Godspell, The Little Mermaid, Bye Bye Birdie, The Golden Age, as well as The Thickness of Skin, and Short Stuff IV ‘Pops’, the latter two both productions at The Barrow Group in New York City.