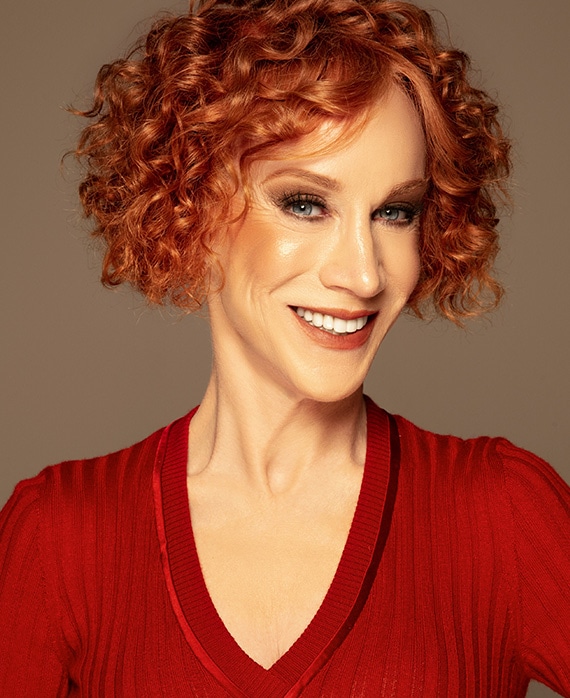 Kathy Griffin is a two-time Emmy® and GRAMMY® Award-winning comedian, a towering figure on television, on tour and in publishing. She is known globally with her universally recognized brand of pull-no-punches comedy. In 2019, Griffin completed her “Laugh Your Head Off” World Tour, which featured sold out performances across the globe including North America, Europe, Australia and Singapore. This worldwide exposure led to her first docu-comedy feature film, Kathy Griffin: A Hell of a Story, which debuted in over 700 theaters nationwide in July 2019. The film was featured in numerous film festivals and received critical acclaim. A Hell of a Story is now available for digital download.

Griffin’s unrivaled style of humor and prolific comedy pedigree makes her one of television's go-to hosts for premier live events. Griffin drew huge worldwide audiences to CNN's New Year's Eve special, which she co-produced and co-hosted with Anderson Cooper for 10 years. Griffin co-hosted the Billboard Music Awards three years in a row, the 41st Daytime Emmy Awards and AARP's Movies for Grownups Gala. Griffin's sure-fire hosting success led to her own live late-night talk show, Kathy. Griffin won two Primetime Emmy Awards for her hit reality series Kathy Griffin: My Life on the D-List, which aired for six years on Bravo and was nominated every year of its run. The show also won the GLAAD Media Award for “Best Reality Program.”

In addition to performing, writing and producing, Griffin is a renowned speaker and has taken her empowering message of equality through activism and humor all over the country. Griffin's passionate advocacy for women, the LGBT community and other disenfranchised groups have been displayed through numerous candid and intimate conversations with award-winning journalists and moderators from Los Angeles Times, The New York Times, the Hudson Union Society, 92Y and Oxford Union, as well as tech giants Google, AOL, Yahoo! and Buzzfeed.

From penning The New York Times best-selling books to filling the country’s biggest concert halls on her comedy tours, Griffin has cemented herself as one of the most powerful figures in comedy and a warrior for the First Amendment. Unfiltered, unafraid and utterly hilarious, she is a must-see for any stand-up fan.