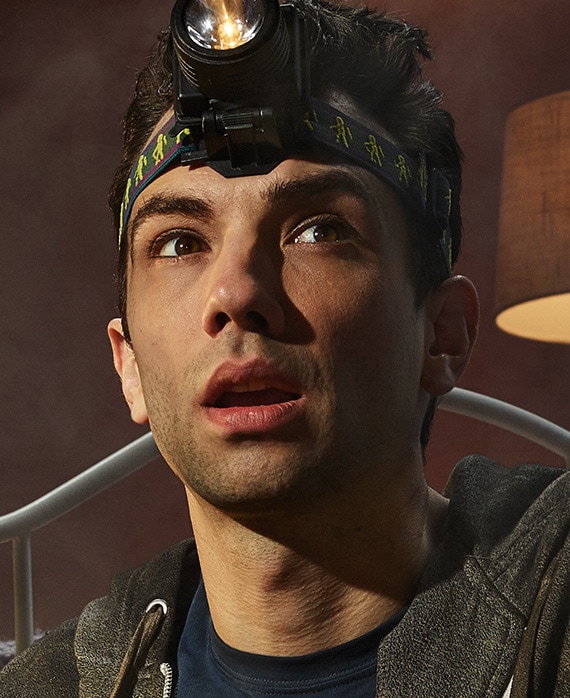 Jay Baruchel stars as “Josh Greenberg,” an average guy who has spent years searching desperately for a girlfriend. This year, he’ll finally find one and realize that his problems are just beginning. In order to survive his first long-term adult relationship, he’ll have to survive all sorts of horrors, from meeting the parents to moving in together. In order to meet these challenges, he'll have to shed some of his insecurities and become a man worthy of marrying Lucy.

Baruchel continues to cement his leading man status with many exciting projects on the horizon. Baruchel is the voice of “Hiccup” in the DreamWorks How to Train Your Dragon franchise. How to Train Your Dragon 2 premiered at the Cannes Film Festival, won a Golden Globe® and received an Oscar® nomination. He co-wrote the film Goon with Evan Goldberg, produced and starred in it opposite Seann William Scott and Liev Schreiber. The film premiered to rave reviews at the Toronto Film Festival, and he was nominated for two 2013 Canadian Screen Awards (Canada’s Academy Awards) in the Best Supporting Actor category and for Adapted Screenplay. Set to release in 2017, Baruchel will next reprise his role in Goon 2, which he also co-wrote and made his directorial debut with.

Baruchel starred opposite Seth Rogen, James Franco, and Jonah Hill in Sony’s hit comedy This is the End, a feature-length film based on a short film that he completed with Rogen, Jay and Seth vs. The Apocalypse. Additionally, he was seen in Robocop opposite Gary Oldman and Michael Keaton, and opposite Kurt Russell and Matt Dillon in the heist film The Art of the Steal, which premiered at the 2013 Toronto International Film Festival and earned him a Best Supporting Actor nomination at the Canadian Screen Awards.

Roles in the Academy Award®-winning movie Million Dollar Baby opposite Clint Eastwood, Hillary Swank and Morgan Freeman and the blockbuster hit Tropic Thunder opposite Ben Stiller, Jack Black and Robert Downey Jr., garnered Baruchel much praise for his versatility. He has also been lauded for his starring role in Jacob Tierney’s comedy The Trotsky which premiered at the 2009 Toronto Film Festival. Baruchel received a Genie Award Lead Actor nomination for his performance in this film. He had a lead role in Bruckheimer Films/Disney feature The Sorcerer’s Apprentice directed by Jon Turtletaub, in which he starred as the “Apprentice” opposite Nicolas Cage. He also won a 2011 Annie Award for his voice work in the Oscar- nominated DreamWorks animated feature, How to Train Your Dragon.

Baruchel began acting at age 12 when he landed a job on the Nickelodeon hit television series Are You Afraid of the Dark?, transforming what was to be a one-time guest appearance into a recurring role. The role was a springboard for his career, leading to his first Canadian series, My Hometown. He then made his debut to American audiences as the star of the critically-acclaimed Judd Apatow television series, Undeclared on FOX.