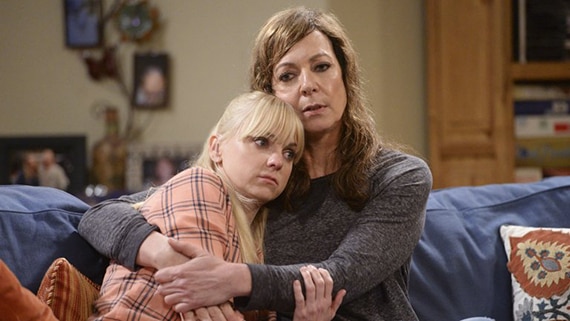 Anna Faris and Emmy Award winner Allison Janney star in Mom, a pulls-no-punches comedy from Executive Producer Chuck Lorre (“The Big Bang Theory,” “Two and a Half Men,” “Mike & Molly”). Christy is a single mom who, after years of questionable choices, is now sober and trying to get her life on track. She’s tested daily by her newly sober mother, Bonnie, who is trying to make up for all the ways she’s let Christy down. Christy is further challenged by her relationships with her own kids. Her daughter Violet is engaged to a man twice her age and her ten-year-old son, Roscoe, would rather live with his father Baxter, a former slacker who has only recently gotten himself together. To help her stay sober, Christy relies on her support system from AA, comprised of her sponsor Marjorie, her wealthy sponsee, Jill, and her emotional friend, Wendy. Christy tries to remain positive as she attempts to overcome her past and build a better future, but with her dysfunctional family and life’s many setbacks, it’s always an uphill battle.

"A Bear and a Bladder Infection"

A Bear and a Bladder Infection

When Christy's long-distance relationship begins to fizzle, she seeks the company of a former fling. Also, Bonnie tries to give up coffee.

"Teenage Vampires and a White Russian"

Teenage Vampires and a White Russian

Bonnie is upset when her brother Ray (LEONARD ROBERTS) is arrested and calls Adam instead of her to bail him out. Also, Christy gets fired from her job at the restaurant.

"An Epi-pen and a Security Cat"

An Epi-pen and a Security Cat

After their home is robbed at Christmastime, Christy and Bonnie's hunt for the thief leads them to an unlikely door.

"Too Many Hippies and Huevos Rancheros"

Too Many Hippies and Huevos Rancheros

Christy and Bonnie rally around Marjorie when her husband has a stroke.

"Poodle Fuzz and a Twinge of Jealousy"

Poodle Fuzz and a Twinge of Jealousy

When an injury temporarily lands Bonnie in a wheelchair, Christy is forced to take over as building manager and makes a surprising discovery.

Bonnie suffers withdrawal after giving up cable TV to help Christy pay for her law school applications. And the women rally around Jill after she has a breakdown in her favorite department store.

"A Seafaring Ancestor and a Bloomin' Onion"

A Seafaring Ancestor and a Bloomin' Onion

Christy discovers she and her younger classmate, Cooper (guest star MICHAEL ANGARANO), make a good team both in and out of the classroom. Meanwhile, Bonnie stops up when a newly sober Natasha fears she can't handle motherhood.

"Fish Town and Too Many Thank You's"

Fish Town and Too Many Thank You's

Bonnie is suspicious when her brother, Ray (recurring guest star LEONARD ROBERTS) returns from rehab and strikes up a friendship with Adam, and Christy and Bonnie have a brush with the law when they take Ray's fancy car for a joy ride.

Bonnie gets cold feet when considering her future with Adam, and Christy risks failing an important test in order to help a fellow alcoholic. Recurring guest star MISSI PYLE returns as Natasha, the birth mother of Jill's foster daughter.