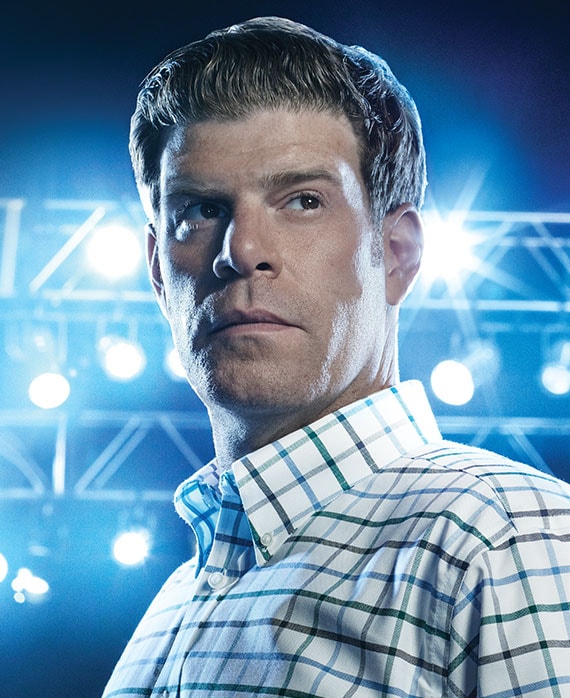 Steve Rannazzisi plays “Kevin,” the League Commissioner. He was the first one of the group to get married and have a kid, which makes him as close as it gets to an adult in this group. He started the League because he thought it would be fun but has now realized it just means babysitting seven more children. His wife, Jenny, used to be the brains of his football operation, but now that she has her own team in the League, he's on his own. He would like to have another child and another championship but his prospects for both seem pretty bleak.


For over 14 years, from the stage to the silver screen, Rannazzisi has made audiences laugh. Rannazzisi emerged on the scene in Los Angeles after leaving a desk job in New York where he grew up. The Long Island native graduated from the State University of New York at Purchase, majoring in Theater and Film. Pursuing his dream, Rannazzisi moved to Los Angeles and began performing at the world-famous Comedy Store on Sunset Blvd. where he honed his skills amongst comedy veterans such as Eddie Griffin, Joe Rogan, and Andrew Dice Clay. He quickly caught the attention of Ashton Kutcher and got his first taste of television as a cast member on MTV’s Punk’d in 2003.


After his success on Punk’d, he was cast as a series regular on the ABC sitcom Big Day, opposite Krysten Ritter. Further proving his comedic acting ability, ABC again cast Steve in See Jayne Run, where he co-starred with Heather Locklear. Rannazzisi has also appeared on Kitchen Confidential alongside Bradley Cooper, Samantha Who? with Christina Applegate and additional shows such as State of Romance, Love Bites, Trust Me, Outsourced and his own web series, Daddy Knows Best. Rannazzisi will next be seen on Fox’s New Girl alongside Jake Johnson, Fred Armisen, Max Greenfield, Hannah Simone, and Lamorne Morris.


Along with his flourishing career in television, Rannazzisi is also a prolific standup comedian. His standup has appeared on Comedy Central’s Premium Blend and is featured in the standup special Pauly Shore & Friends. He released his own special in 2013 called Rannazzisi: Manchild which aired on Comedy Central and received 4.5/5 stars on Amazon. He is currently traversing the country for his Strawberry Blonde Ambition Tour and will be releasing a special for Comedy Central later this year.


On the silver screen, Rannazzisi appeared in the 2009 blockbuster comedy smash hit Paul Blart: Mall Cop alongside Kevin James and Jayma Mays. He also appeared in the family comedy Imagine That, with Eddie Murphy in 2009 and For Your Consideration, a comedy set in the mid-1940s with Catherine O’Hara and Eugene Levy.