Aaron in "Moment of Silence" 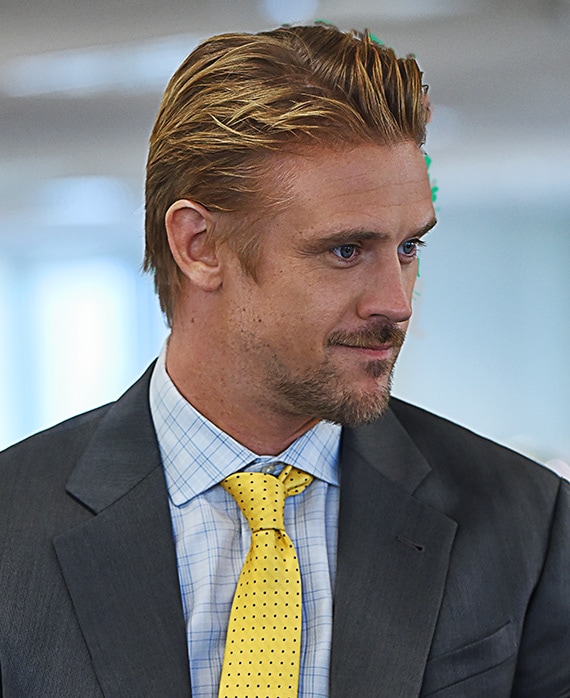 Boyd Holbrook has amassed an impressive resume of meaningful and intense roles, starring alongside some of Hollywood's most well-respected actors and working with the industry’s most visionary filmmakers, proving to be one of the industry's most engaging and thoughtful talents, both in front of and behind the camera.

Most recently Holbrook starred in Sean Ellis’ horror film Eight for Silver, which premiered at the 2021 Sundance Film Festival. He is currently in production on the upcoming Netflix series The Sandman opposite Tom Sturridge and Gwendoline Christie that is based on the 1989–1996 comic book written by Neil Gaiman and published by DC Comics. He also stars in B.J. Novak’s Vengeance, a Blumhouse thriller co-starring Ashton Kutcher and Issa Rae. Upcoming, Holbrook will be starring in Netflix’s feature film Beckett alongside John David Washington and Alicia Vikander.

Holbrook can be seen in Netflix’s We Can Be Heroes alongside Priyanka Chopra, Christian Slater and Pedro Pascal. In 2020, he starred in Quibi’s series The Fugitive opposite Kiefer Sutherland, a remake of the 1963 television series and the 1993 film, both of the same name. He also recently starred in the Netflix film In the Shadow of the Moon opposite Michael C. Hall, and in the feature film Two/One that made its U.S. premiere at the 2019 Tribeca Film Festival.

In 2018, Holbrook starred as the lead in Shane Black’s Predator remake. Prior to that, he played the villain in James Mangold’s Oscar®-nominated Logan opposite Hugh Jackman. In past years, Holbrook has been involved in an array of films including Jason Lew's The Free World opposite Elisabeth Moss and Octavia Spencer, which premiered at the 2016 Sundance Film Festival, Fox's sci-fi thriller Morgan opposite Kate Mara and Paul Giamatti, Gavin O'Connor's Jane Got a Gun alongside Natalie Portman and Ewan McGregor, Warner Bros.’ Run All Night with Liam Neeson and Ed Harris, David Fincher’s adaptation of Gillian Flynn’s novel Gone Girl, Scott Frank’s crime drama from Universal A Walk Among the Tombstones with Liam Neeson, Craig Johnson’s character-driven indie Skeleton Twins starring Kristen Wiig and Bill Hader, which made its debut at the 2014 Sundance Film Festival, Very Good Girls alongside Elizabeth Olsen, Dakota Fanning and Peter Sarsgaard, which premiered at the 2013 Sundance Film Festival and Scott Cooper’s Out of the Furnace alongside Christian Bale and Zoe Saldana. Preceding this success, Holbrook had a prolific role in Van Sant’s Oscar-nominated drama Milk.

In television, Holbrook starred in the first two seasons of the critically-acclaimed Netflix original series Narcos, which received a 2016 Golden Globe® nomination for “Best TV Series, Drama.” Holbrook’s other TV credits include HBO’s Liberace biopic directed by Steven Soderbergh, Behind the Candelabra with Michael Douglas and Matt Damon, which opened to rave reviews at the 2013 Cannes Film Festival, the Emmy®-nominated television miniseries Hatfields & McCoys and the Golden Globe-nominated Showtime series The Big C.

The multi-hyphenated Holbrook made his directorial debut with Peacock Killer, which he also wrote. It is a short film based on a short story of the same name by Sam Shepard and starring Shea Whigham. He is currently in development to write, star and executive produce The Thirst, an epic action-thriller that will be produced by John Davis. Based on an original idea of Holbrook's, the film explores a near future where water is a scarce commodity. He also pursues other creative endeavors as an avid sculptor. His work has been exhibited at various locations, including the Rare Gallery in New York.