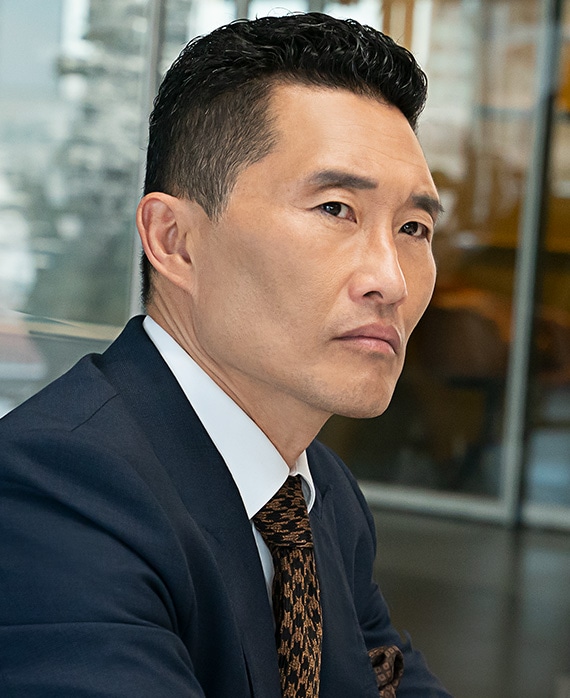 Daniel Dae Kim has captivated global audiences with his transformative performances across film, television and theater. He continues to evolve his body of work as an actor, director and producer.

In 2022, Kim can be seen in AMC’s Pantheon, an ambitious one-hour animated drama based on a series of short stories by Ken Liu about Uploaded Intelligence, which also features the voices of Katie Chang, Paul Dano, Rosemarie DeWitt, Aaron Eckhart, Taylor Schilling and Ron Livingston. Kim is currently in production on the second installment of National Geographic’s scripted anthology series The Hot Zone: Anthrax. Based on the domestic terror attacks following 9/11, Kim stars opposite Tony Goldwyn.

The prolific actor is a longtime champion of increased diversity and Asian American representation in Hollywood and has served as an important voice throughout the current surge of violence toward people of Asian descent. His work as an advocate has been documented in The New York Times, Washington Post, ABC News’ Nightline and a five-part PBS documentary.

In 2015, Kim forged a new path in his career by creating his own production company 3AD. With a first look deal with Amazon Studios, 3AD strives to feature those traditionally underrepresented in front of and behind the camera. 3AD has had four seasons producing ABC’s The Good Doctor, which Kim adapted from a Korean format and serves as Executive Producer. He has several other projects in development, including a highly anticipated heist movie with Randall Park. Kim and 3AD will also produce dramedy series Shoot The Moon starring Ken Jeong.

Prior to his seven-season portrayal of “Chin Ho Kelly” on the juggernaut series Hawaii Five-0, Kim was perhaps best known for his role as “Jin Soo Kwon” on the hit TV series Lost, for which he shared a 2006 Screen Actors Guild Award for “Best Ensemble” and was individually honored with an AZN Asian Excellence Award, a Multicultural Prism Award and a Vanguard Award from the Korean American Coalition, all for “Outstanding Performance by an Actor.” He has been repeatedly recognized with the prestigious KoreAm Driven Award in the field of Arts and Entertainment.

In 2016, Kim received a Broadway Beacon Award for his role as the “King of Siam” in Lincoln Center's Tony Award®-winning production of The King and I, as well as the Theater Legacy Award from New York's Pan Asian Repertory Theater.

Previous credits include the films: Hellboy, Insurgent, Allegiant, The Jackal, For Love of the Game, The Hulk, Spider-Man 2, as well as the Academy Award®-winning film Crash. Previous television credits include: The Legend of Korra, Flack, New Amsterdam, Crusade and 24. Kim has also lent his voice talents to animated series and films, such as the award-winning Studio Ghibli film The Tale of Princess Kaguya, as well as the PBS nature documentary series Big Pacific and Asian Americans. For video games, he’s voiced several characters, most notably, “Johnny Gat” in the bestselling series Saints Row.

Born in Busan, South Korea, and raised in New York and Pennsylvania, Kim discovered acting while a student at Haverford College. After graduation, he moved to New York City where he began his career on stage, performing in classics such as Romeo and Juliet, Ivanov and A Doll's House. Despite early success,he chose to further his knowledge by enrolling in New York University's Graduate Acting Program, where he earned his master's degree.

When not working, Kim and his family make their home in Hawaii.