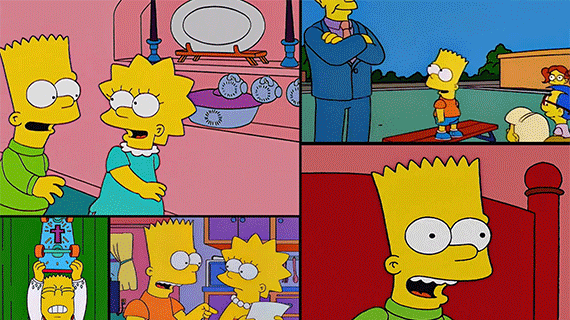 The Simpsons is a long-running, award-winning animated comedy about the Simpson family in Springfield. Homer, Marge, Bart, Lisa and Maggie are instantly identifiable around the world.

The Simpsons exploded into a cultural phenomenon in 1990, and has remained one of the most groundbreaking and innovative global entertainment franchises. “The Simpsons Movie” was a hit feature film, the attraction “The Simpsons Ride” at Universal Studios has received several updates including the addition of “Springfield,” and the show was honored with a Star on The Hollywood Walk of Fame in 2000.

Marge tries to get Homer to lose weight. But instead, he finds a support group that encourages him to embrace his largeness. Presented by FXX.

Homer ends up with a superhero's physique after he's chosen to appear in a film based on a character created by The Comic Book Guy. Presented by FXX.

Bart has a heart attack after he becomes addicted to junk food; the Simpsons turn the house into a youth hostel, which is soon overrun by German backpackers. Presented by FXX.

When Homer loses his driver's license, he embraces walking. But Marge begins to suffer from stress when the pressure of being the only full-time driver in the house takes its toll-and ends up running Homer over in her car. Presented by FXX.

"The Strong Arms of The Ma"

The Strong Arms of The Ma

When Marge is mugged at the Kwik-E-Mart, she develops agoraphobia and ends up living in the basement... until she turns into a fearless bodybuilder. Presented by FXX.

After Springfield wins the title of World's Fattest Town, Marge launches an anti-sugar crusade, and sugar is banned from the city. Presented by FXX.

"King of the Hill"

King of the Hill

After improving his physique, Homer attempts to climb a treacherous mountain. Presented by FXX.

Homer intentionally gains weight so he can qualify for disability and work at home. Presented by FXX.

Marge renews her interest in becoming an artist after Homer finds an old painting of Ringo Starr in the attic. Mr. Burns commissions Marge to paint a portrait of him.