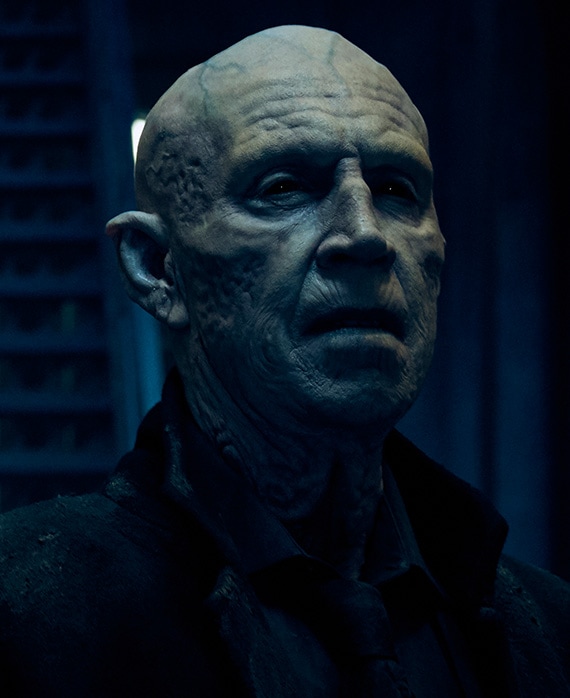 Jonathan Hyde stars as “Eldritch Palmer / The Master.” After narrowly escaping a watery grave, the Master succeeded in spreading his strain and conquering the globe. Now, with Eldritch Palmer as his host and loyal Eichhorst by his side, the Master is focused on ensuring his infinite reign – a task that involves grooming Eph's son, Zack, for a mysterious purpose.

But while the Master's dominance seems absolute, one major threat still looms: Setrakian, Quinlan, Eph and the others are still out there somewhere, and the Master will stop at nothing to bring them to their knees.

Jonathan Hyde is an Australian-born actor who moved to Britain in 1969. He graduated from the Royal Academy of Dramatic Art in 1972, the recipient of the Bancroft Gold Medal. Hyde’s first love was, and is, the theater. He has worked extensively at the National Theatre, the Royal Shakespeare Company, the Prospect Theatre Company, Almeida, Menier Chocolate Factory and the great Citizen’s Theatre Company of Glasgow, among others. His work at Glasgow earned him an Olivier Award Nomination. Hyde has also worked extensively in London’s West End, most recently in 2012 as “Lionel Logue” in The King’s Speech.

The 1980s saw Hyde’s advance into television, culminating in his role as “Sir Edward Marshall Hall” in the legal series Shadow of the Noose. The 1990s were his Hollywood years with roles in Ri¢hie Ri¢h, Jumanji, Anaconda and The Mummy.

Since the millennium, Hyde has worked in television, film and theater including a world tour of King Lear and The Seagull for the Royal Shakespeare Company and most recently, Travels with My Aunt in 2013 at the Menier Chocolate Factory. Next, Hyde will be starring as “Sir William Webb” in Tokyo Trials, an upcoming four-part television series directed by Pieter Verhoff and Rob King, co-produced by NHK (Japan), FATT (Netherlands) and Don Carmody Television (Canada), and financed by NHK, Netflix and the Dutch Film Fund. He also appears as “Strickler” in Guillermo del Toro's Trollhunters.

Hyde is principally a character actor who has played a wide range of high-definition roles from “Lady Bracknell” to the “Marquis de Sade,” “Diaghilev” to “Captain Hook,” “Valmont” to “Brutus.”

An enthusiastic swimmer, painter and traveler, Hyde lives in England with his wife, the soprano Isobel Buchanan.