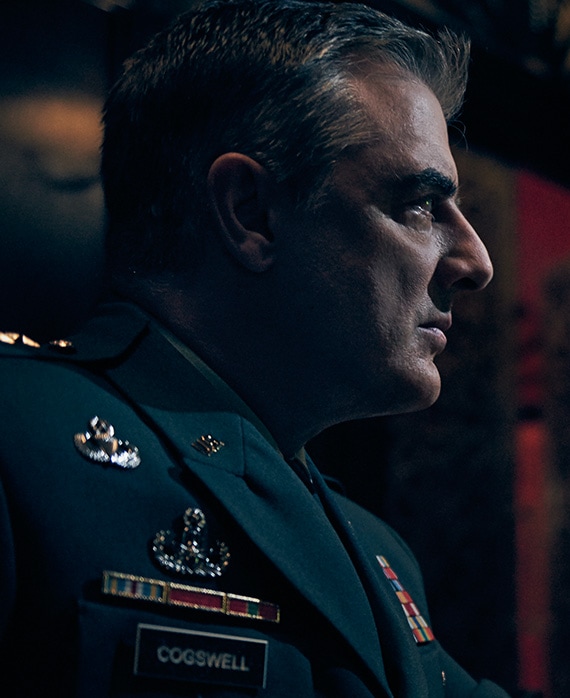 Chris Noth plays “Willam Cogswell,” an American general who has been sent by the U.S. to advise the Abuddinian military and government. He is seeking to extend American influence in the region. Wry and pragmatic, Cogswell has a world weary sense of the quagmire that is the Middle East, as well as his own jingoistic impulses. But he has history there to back up these feelings, including a history with Leila.

Chris Noth is an accomplished graduate of the Yale School of Drama that continues to build upon a versatile career in film, television and on stage.

Among his credits are two of the most successful series in television history: Law & Order and Sex and the City. Noth originated the role of “Mike Logan” on the first five seasons of Law & Order and then reprised the role on Law & Order: Criminal Intent. He shared two SAG Award® nominations for Outstanding Performance by an Ensemble in a Drama Series with his fellow cast members. For his portrayal of “Mr. Big” in HBO’s Sex and the City, Noth earned a Golden Globe® nomination. His performance as “Peter Florrick” in the CBS drama The Good Wife earned him a Golden Globe nomination as well as two SAG Award nominations for Outstanding Ensemble.

On television, Noth starred and executive produced the TNT original film Bad Apple, and starred in the TNT epic miniseries Caesar and the TNT telefilm Exiled. He can be seen in the BBC Series Titanic: Blood and Steel.

Chris’ film credits include Chronically Metropolitan starring Ashley Benson and Mary Louise Parker, White Girl opposite Justin Bartha, After the Ball, Elsa & Fred, with Christopher Plummer and Marcia Gay Harden, Lovelace with Amanda Seyfried and Peter Sarsgaard, Frankie Go Boom, Sex and the City 2, Sex and the City, My One and Only, The Perfect Man, Mr. 3000, Searching for Paradise, Double Whammy, Cast Away, Texas Funeral, Getting to Know You, The Broken Giant, The Confession, Cold Around the Heart and Naked in New York.