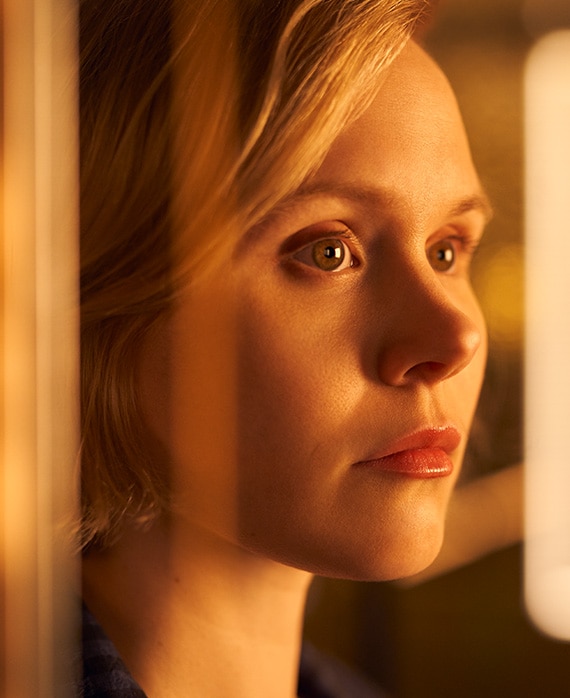 Alison Pill stars as “Katie.” Katie is a gifted quantum physicist tapped by Forest to be his second in command at Amaya.

Pill has effortlessly segued between the stage and big and small screens over an impressive career. A Tony®, Outer Critics’, Lucille Lortel and Drama League nominee, Pill has played pivotal roles in three of the Academy’s Best Picture contenders. Her proven ability to seek out and transform into a diverse tapestry of characters has cemented her place as one of the most talented actors working today.

Pill most recently worked on Star Trek: Picard for CBS All Access. She was also recently seen in the Oscar® nominated auto-biographical film Vice, written and directed by Adam McKay opposite Christian Bale, Amy Adams and Steve Carrell. Most recently she starred on Broadway in the Tony nominated production of Three Tall Women written by Edward Albee and directed by Joe Mantello, opposite Glenda Jackson and Laurie Metcalf.

Pill’s film credits include Miss Sloane; Hail, Caesar!; Snowpiercer; Goon; Scott Pilgrim vs. the World; Milk; Dan in Real Life; Dear Wendy and Pieces of April. Her television work includes Ryan Murphy’s American Horror Story: Cult, ABC’s The Family, HBO’s The Newsroom and In Treatment, The Book of Daniel and Life with Judy Garland: Me and My Shadows.

On stage, Pill starred opposite Ben Stiller in House of Blue Leaves, alongside Edie Falco in This Wide Night and with Abigail Breslin in Broadway’s revival of The Miracle Worker. Her other theater credits include Wait Until Dark, Reasons to be Pretty, Mauritius and Blackbird, for which she received Lucille Lortel, Outer Critics Circle and The Drama League Award nominations. She was nominated for a Tony Award for her Broadway debut in The Lieutenant of Inishmore and a Lucille Lortel Award for On the Mountain. She also won The Drama Desk Award for Outstanding Ensemble in the U.S. premiere of The Distance from Here.