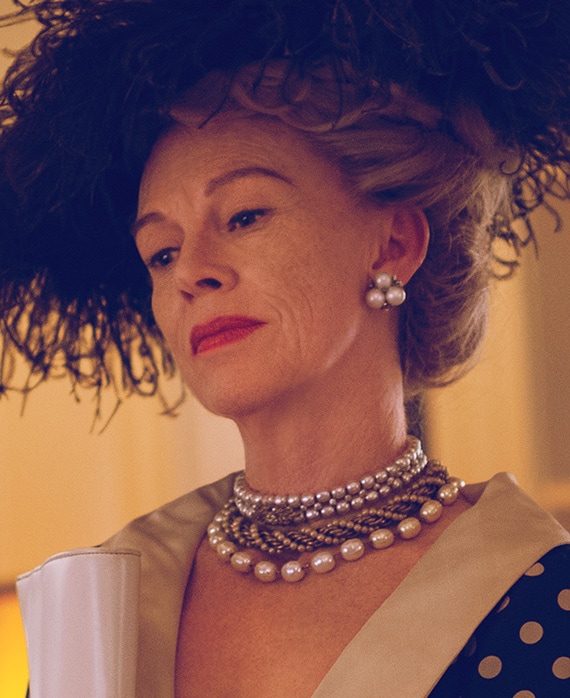 Graduating from drama school NIDA in 1977, Judy Davis first came to prominence for her role as “Sybylla Melvyn” in the coming-of-age saga My Brilliant Career, for which she won BAFTA Awards for Best Actress and Best Newcomer.

The two-time Emmy Award®- winner is best known for portraying formidable real-life women on TV, including the notorious felon, “Sante Kimes,” in A Little Thing Called Murder and Hollywood legend, Judy Garland, in the miniseries Life With Judy Garland: Me and My Shadows. Davis made television history when Life With Judy Garland received the most nominations for a single performance and won every award she was nominated for, including the Emmy, Golden Globe®, Screen Actors Guild® and the American Film Institute Award. She was also nominated for her portrayal of “Lillian Hellman” in Dash and Lilly, her frigid society matron in A Cooler Climate and her interpretation of Nancy Reagan in the controversial biopic The Reagans. She was most recently seen in Salting The Battlefield, the final installment in the Jonny Worricker trilogy including the TV movies Turks & Caicos and Page Eight.

Davis received Academy Award® nominations for her roles in A Passage To India and Woody Allen's Husbands and Wives. Woody Allen is a great admirer of Davis’ work and has cast her in five films: Husbands and Wives, To Rome With Love, Celebrity, Deconstructing Harry and Alice.

Recent film credits include Jocelyn Moorhouse’s The Dressmaker starring opposite Kate Winslet, The Young and Prodigious T.S. Spivet, Marie Antoinette, The Break Up, Kangaroo, Impromptu, Naked Lunch, Barton Fink, The Ref, On My Own, Blood and Wine, Children of the Revolution and Absolute Power. Australian productions include Swimming Upstream, opposite her Eye Of The Storm co-star Geoffrey Rush, and AFI award-winning roles in Kangaroo and High Tide.

In theatre, Davis made her professional debut as “Juliet,” opposite Mel Gibson's “Romeo.” She also played both “Cordelia” and the “Fool” in a 1984 staging of King Lear for the Nimrod Theatre Company. Her other credits for the company include their productions of Miss Julie / The Bear, Inside The Island, and in 1986 the title role in Hedda Gabler, a landmark performance in Australian theatre. In the early '80s, she portrayed French chanteuse “Edith Piaf” in the play PIAF at the Perth Playhouse, and also starred in Visions (Paris Theatre Company.) She made a return to stage and starred in and co-directed Victory, as a Puritan woman determined to locate her husband's dismembered corpse. Other stage directorial credits include The School for Scandal and Barrymore, all three of which were for the Sydney Theatre Company. Most recently, she portrayed the role of fading actress “Irina Arkadina” in Anton Chekhov's The Seagull at Sydney's Belvoir St Theatre to critical acclaim and sold out audiences.