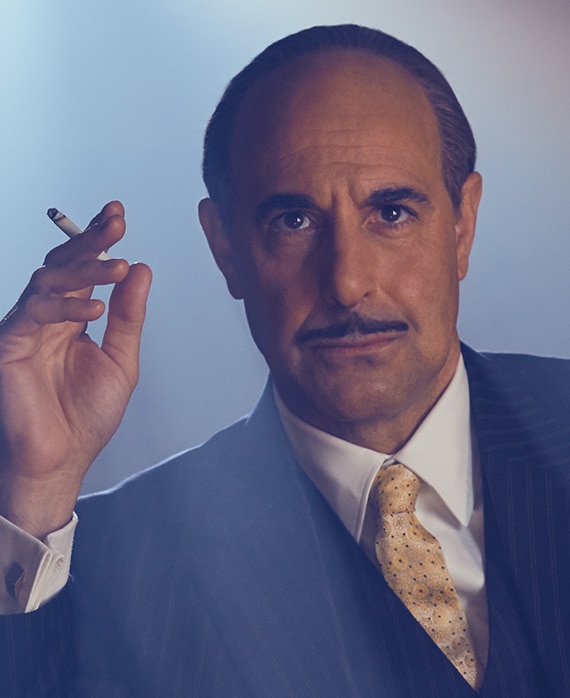 Academy Award® nominee Stanley Tucci has appeared in over 90 films and countless television shows. He has appeared in more than a dozen plays, on and off Broadway, and has been behind the camera working as a writer, director, and producer.

Tucci reached his widest audience yet in the role of “Caesar Flickerman” in The Hunger Games franchise, the fourth and final installment of the series (Mocking Jay). He completed production on Final Portrait, the highly-anticipated drama set to release in 2017 that he wrote and directed. Next up for Tucci is Bill Condon’s Beauty and the Beast, which will release on March 17, 2017. Other upcoming projects set to release in 2017 are Transformers: The Last Knight, Patient Zero and Blue Angel.

Additionally, Tucci produced The Canal, was the executive producer for Behind The Sun, and is the director/writer for Final Portrait. He premiered the film Blind Date at The Sundance Film Festival – directing, starring, and co-writing this Van Gogh remake. Another directorial endeavor was USA Films’ Joe Gould’s Secret and Big Night, Tucci’s first effort as co-director, co-screenwriter, and actor on the same film, which earned him numerous accolades, including the Waldo Salt Screenwriting Award at the 1996 Sundance Film Festival, a recognition of Excellence by the National Board of Review, an Independent Spirit Award, The Critics Prize at the 1996 Deauville Film Festival, and honors from the New York Film Critics and the Boston Society of Film Critics. His second project, The Imposters, a film which he wrote, directed, co-produced, and starred in, was an Official Selection at the 1998 Cannes Film Festival and was acquired by Fox Searchlight Pictures later that year.

His work on television includes BoJack Horseman, Metropolis, Fortitude, Bull, Equal Justice, Wiseguy, The Equalizer, thirtysomething, and The Street. He also played “Captain Hook” in ITV’s two-hour drama, Peter & Wendy. Tucci received Emmy nominations for his work in Murder One, and ER, and an Emmy Award in the category of Outstanding Guest Actor in a Comedy Series for Monk.

Tucci’s theater work includes Frankie & Johnny in the Claire de Lune, Execution of Hope, The Iceman Cometh, Brighton Beach Memoirs and The Misanthrope. He has also performed in a number of Off-Broadway plays, at Yale Repertory Theater and SUNY Purchase, where he first studied acting. Tucci made his directorial debut on Broadway with a revival of Ken Ludwig’s Lend Me a Tenor starring Tony Shalhoub. The production received a Tony Award® nomination for Best Revival of a Play.

Additional film credits include Spotlight, A Little Chaos, Transformers: Age of Extinction, Wild Card, Muppets Most Wanted, Mr. Peabody & Sherman, Some Velvet Morning, The Fifth Estate, Percy Jackson: Sea of Monsters, The Company You Keep, Jack The Giant Slayer, Captain America: The First Avenger, Margin Call, Burlesque, Easy A, Julie & Julia, The Tale of Despereaux, Kit Kitteredge: An American Girl, Swing Vote, What Just Happened, The Devil Wears Prada, Shall We Dance, The Terminal, The Life And Death of Peter Sellers, Spin, Road To Perdition, America’s Sweethearts, Sidewalks of New York, A Mid Summer Nights Dream, The Alarmist, Deconstructing Harry, The Daytrippers, Big Trouble, A Life Less Ordinary, Kiss of Death, Mrs. Parker And The Vicious Circle, It Could Happen To You, The Pelican Brief, Prelude To A Kiss, In The Soup, Billy Bathgate and Slaves Of New York.

The Tucci Cookbook was released in October of 2012 where it reached the New York Times Best Sellers List. Tucci released his 2nd cookbook, The Tucci Table: Cooking With Family and Friends, on October 28, 2014. The family-focused cookbook includes recipes from Tucci’s traditional Italian roots as well as those of his British wife, Felicity Blunt’s.

Tucci serves on the Board of Directors of The Food Bank for New York City and currently resides in London.