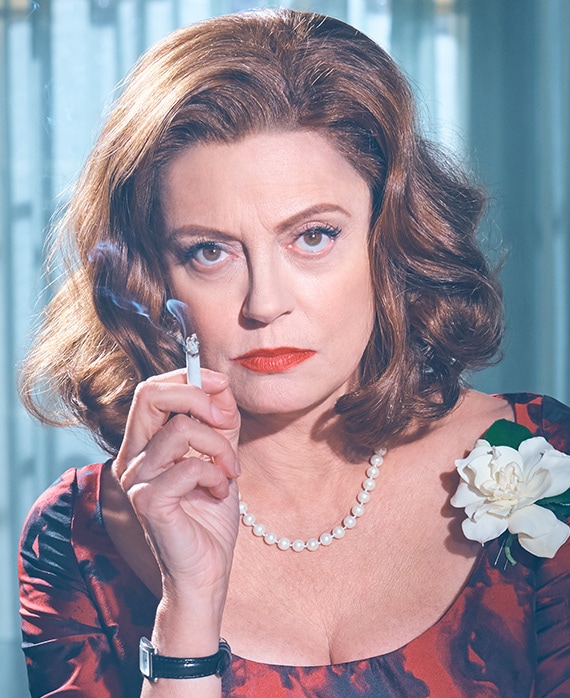 Susan Sarandon is a Producer and stars as renowned actress Bette Davis in the FX anthology series FEUD: Bette and Joan, from Executive Producer Ryan Murphy.

The extremely versatile Susan Sarandon brings her own brand of sex appeal and intelligence to every role – from her fearless portrayal in Bull Durham to her Oscar®-nominated performances in Thelma and Louise, Lorenzo’s Oil, The Client, and Atlantic City to her Academy Award®-winning and SAG Award®-winning role in Dead Man Walking as “Sister Helen,” a nun consoling a death-row inmate.

Sarandon made her acting debut in the movie Joe, which she followed with a continuing role in the TV drama A World Apart. Early film credits include The Great Waldo Pepper, Lovin’ Molly, Billy Wilder’s The Front Page, the 1975 cult classic The Rocky Horror Picture Show and Louis Malle’s controversial Pretty Baby. She went on to receive her first Oscar nomination in Malle’s Atlantic City.

The hard-working actress has made a career of choosing diverse and challenging projects both in film and television. In 2008, she received an Emmy® nomination for Outstanding Lead Actress in a Miniseries for her role in the HBO film Bernard and Doris, as well as a Golden Globe and SAG nomination. She received an Emmy and SAG nomination for her work in Barry Levinson’s You Don't Know Jack with Al Pacino for HBO.

She starred in the 2003 CBS movie Ice Bound; in the Sy-Fy Channel mini series Children of Dune; in the TV Movie The Exonerated; in HBO’s Earthly Possessions; in the CBS movie Women of Valor; and the HBO miniseries Mussolini: The Decline and Fall of Il Duce. She has made guest appearances on 30 Rock, The Big C and in the “Mother Lover” video on Saturday Night Live.

She can currently be seen in The Meddler (Sony Classics) with J.K. Simmons and Rose Byrne and her next film is the untitled Weinstein project with Naomi Watts and Elle Fanning. She was also recently named as the new face of L’Oreal.