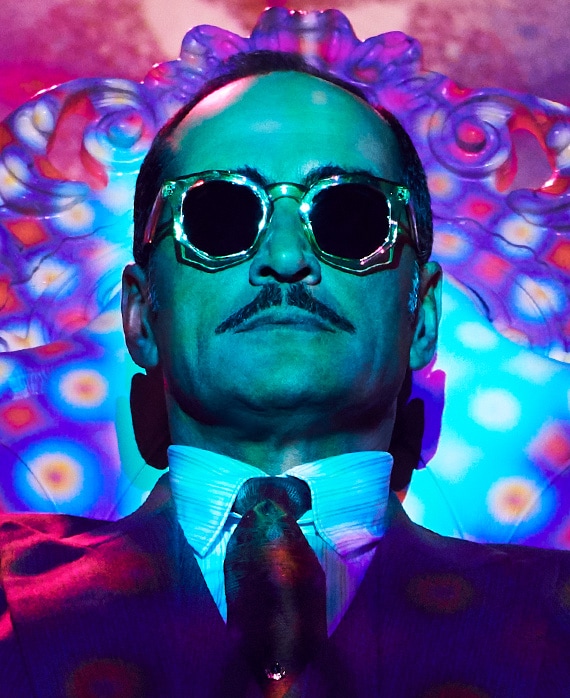 Navid Negahban portrays “Amahl Farouk,” the villain with a thousand faces, aka the Shadow King. He is an ancient mutant who resided in David’s mind for 30 years. He is a trickster with a wicked sense of humor who delights in using his mental influence to turn the world upside down for those around him. Now that Farouk’s aligned with the noble forces of Division 3, however, surely his evil ways have come to an end…

A versatile actor and producer who is known as “the man of a thousand faces,” Navid Negahban is widely regarded for his portrayal of “Abu Nazir” on the Emmy® Award-winning series Homeland opposite Claire Danes, Mandy Patinkin and Damian Lewis. His quiet and composed depiction of the dangerous al-Qaeda leader won him worldwide recognition, making him a household name after just two seasons. Negahban has over 120 titles to his credit and his compelling performances have earned him a fanbase that includes both former Israeli President Shimon Peres and former U.S. President Barack Obama.

Negahban has had a variety of starring roles in film and television, including Jerry Bruckheimer Films and Black Label Media’s 12 Strong, Gerard Barrett‘s Brain on Fire, the independent film Baba Joon, which won five Ophir Awards (the equivalent of the Israeli Oscar®), American Assassin and Clint Eastwood’s American Sniper which became the top grossing film of 2014 and was nominated for countless awards including six Academy Award nominations. Other feature credits include supporting roles in Brothers, Charlie Wilson’s War, Words and Pictures and Henry Hughes’ Day One, which was nominated for an Oscar for Best Short Film – Live Action in 2015.

In television, Negahban’s critically acclaimed portfolio includes 24, Curb Your Enthusiasm, The Catch, Scorpion, Law & Order: SVU, Veep, The Messengers, CSI: NY, The Closer, The West Wing, Without a Trace and The Shield, among others.

Negahban recently received a historic BAFTA nomination for his performance as “Hajj Agha” in the video game “1979 Revolution: Black Friday,” marking the first time a Middle Eastern and Muslim actor has been nominated in this category. The game, based on the Iranian revolution, was granted support from the Doris Duke Foundation in partnership with Sundance Institute’s New Frontier Program for the Islamic Art’s New Frontier Fellowship.

Born in Mashhad, Iran and fluent in English, Farsi and German, Negahban knew he was going to be an actor at the age of eight, when he stepped on stage for the first time. His passion for acting led him west, first to Germany where he spent eight years honing his theatrical skills and eventually to the United States. Navid is an avid world-traveler with a deep sense of curiosity and adventure and a wide-range of interests spanning everything from anthropology to poker. He likes to say that the world and each person he meets are his best teachers.