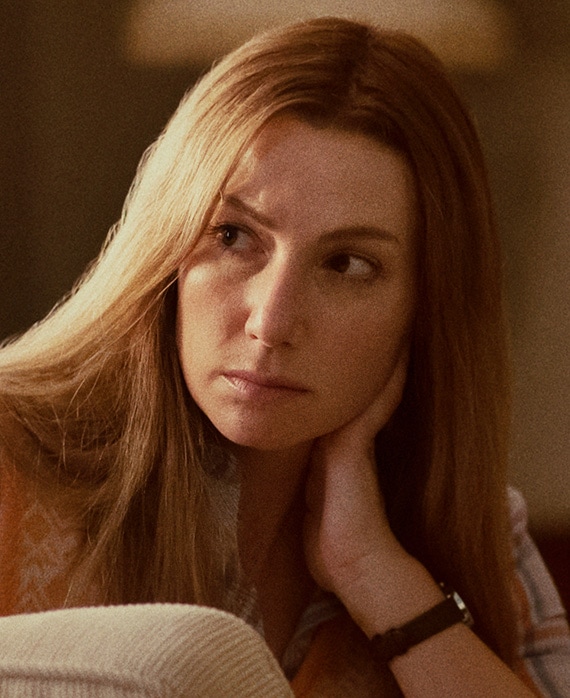 A Harvard-educated lawyer, "Brenda Feigen-Fasteau," portrayed by Ari Graynor, was a young feminist in the women's movement who co-founded Ms. Magazine with Steinem, worked with Ruth Bader Ginsberg at the ACLU, and helped the feminist effort to ratify the ERA.

Graynor most recently starred opposite Melissa Leo in Showtime’s I’m Dying Up Here.

On stage, Graynor most recently starred in the MCC Theater production of Yen, the American premiere of Anna Jordan’s Bruntwood Prize-winning play. Graynor received a Lucille Lortel Award nomination for her performance in the play, which also starred Lucas Hedges and Justice Smith. Over her illustrious theater career, Graynor has appeared in numerous stage productions both on and off Broadway, beginning with her 2005 Broadway debut in Donald Marguiles’ Brooklyn Boy, for which she received the 2005 Clarence Derwent Award for Most Promising Female Actress. Other Broadway productions include the 2007 Douglas Carter Beane Tony Award®-nominated play The Little Dog Laughed; David West Reade’s The Performers; and Woody Allen’s Honeymoon Motel, which is part of the Relatively Speaking anthology.

Among her many additional stand-out television credits, Graynor starred in and produced the CBS comedy Bad Teacher and played “Caitlin,” the troubled roommate of “Meadow Soprano” on The Sopranos.

Graynor was born in Boston, Massachusetts and currently resides in both New York City and Los Angeles.