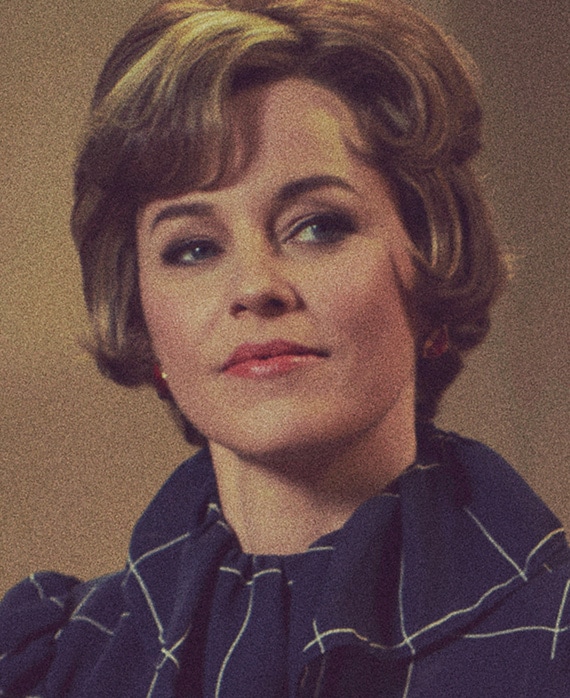 A pro-choice, socially progressive Republican, "Jill Ruckelshaus," portrayed by Elizabeth Banks, was appointed by President Ford to run a presidential commission to advance women’s rights and push for ratification of the ERA. She fought to keep the Republican Party from being taken over by the Religious Right.

Banks’ career as an actress, producer and director continues to flourish with another prolific year ahead. She is known for roles in both comedy and drama, with stand-out performances in projects including The Hunger Games franchise, Love & Mercy and The LEGO Movie. She is also a three-time Emmy® nominee for her recurring roles in 30 Rock and Modern Family.

Banks’ latest project is the Charlie’s Angels film at Sony Pictures, which she produced, directed, wrote and appeared in as “Bosley.” Her newest television series Shrill, starring Aidy Bryant, is currently streaming on Hulu and premiered at the SXSW Festival to glowing reviews. Banks produced Shrill through her company Brownstone Productions, which she co-owns with her husband Max Handelman. The company is best known for producing the hit Pitch Perfect franchise.

In 2019, she lent her voice again to “Wildstyle” opposite Chris Pratt in The LEGO Movie 2: The Second Part after voicing the same character in the box office smash hit The LEGO Movie in 2014. In 2017, she was seen in Pitch Perfect 3 reprising her role as “Gail.” In 2015, Banks returned to her popular role as “Effie Trinket” in The Hunger Games: Mockingjay – Part 2. She also appeared in a cameo role in Magic Mike XXL and in the Netflix reprisal of Wet Hot American Summer. In 2014, she received critical acclaim in Love & Mercy for her role as Melinda Wilson opposite Paul Dano and John Cusack.

On the small screen, Banks earned three Emmy nominations for Outstanding Guest Actress in a Comedy Series for her performances as “Avery Jessup” on 30 Rock and her guest appearances as “Sal” on ABC’s Modern Family. She also appeared in a recurring role as “Dr. Kim Porter” on NBC’s Scrubs. Banks reprised her role as “Lindsay” in Netflix’s Wet Hot American Summer: First Day of Camp and has wrapped production on Wet Hot American Summer: 10 Years Later.

On the production side, she made her directorial debut in 2015 with Pitch Perfect 2, which was the biggest opening weekend for a musical comedy in history, the biggest opener for a first-time feature film director and the second-largest opening for a female director. It also garnered her the Breakthrough Filmmaker of the Year Award at the 2015 CinemaCon Awards. With an exclusive television deal at Warner Bros. Television and first look film deal at Universal, Brownstone Productions’ slate currently includes multiple film, television and digital collaborations across various networks. Their upcoming film slate includes The Grace Year, Science Fair, Magic School Bus, Paperbag Princess and Uncanny Valley at Universal Pictures; and Misconception at Sony Screen Gems. On the television side, Brownstone’s slate includes season two of the critically acclaimed series Shrill starring Aidy Bryant at Hulu; DC Superhero High at HBO Max, Mavenhood at NBC; Borrowed Time at CBS; an animated comedy series based off The Flintstones with Warner Bros. Animation; Love Me at ABC; and The Twelve at FOX.

Originally from Massachusetts, Banks received her bachelor’s degree from the University of Pennsylvania and her graduate degree at the American Conservatory Theater. She is involved with many charities, including the Center for Reproductive Rights, Planned Parenthood, LA’s Best, Temple Israel of Hollywood, The First Lady’s Reach Higher Initiative, Heifer International, Intrepid Fallen Heroes Fund and Turnaround Arts.