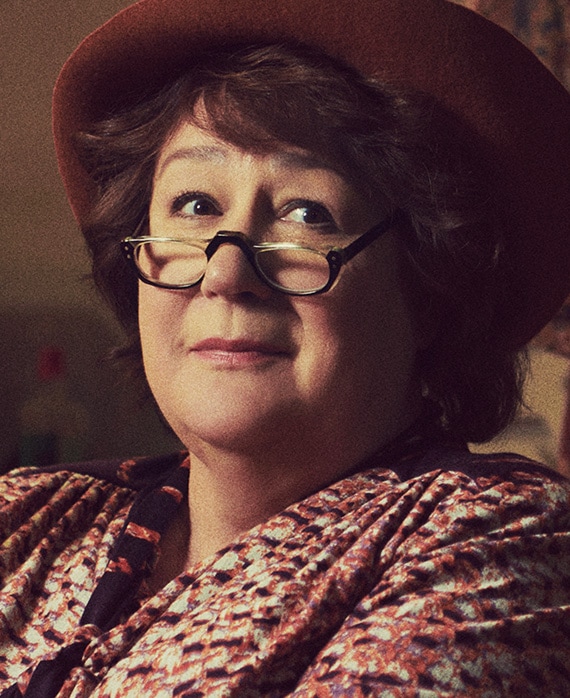 A leading figure in the feminist movement, "Bella Abzug," portrayed by Margo Martindale, was a three-term Congresswoman who co-founded the National Women’s Political Caucus, and spearheaded the effort to pass the ERA.

Three-time Emmy® winner Margo Martindale is one of the world’s busiest and most acclaimed character actresses.

Currently, Martindale can be seen starring alongside Patricia Arquette in Hulu’s The Act, and at odds with Tiffany Haddish, Melissa McCarthy and Elizabeth Moss in the New Line feature The Kitchen.

In the last few years, Martindale was nominated for a Critics’ Choice Award for Best Supporting Actress in a Drama Series for her role as “Audrey Bernhardt” on Sneaky Pete. She also made Emmy history as the first person to win Outstanding Guest Actress in a Drama Series two years in a row (2015 and 2016) for her role as the deadly KGB handler “Claudia” in FX’s The Americans. This is coming off an acclaimed major arc on the final season of CBS’ beloved The Good Wife, for which she won the 2016 Critics’ Choice Award for her role as “Willa Eastman,” the cunning political strategist. She has since reprised her award-winning role on the CBS All Access spin-off The Good Fight.

On the big screen, Martindale recently appeared in Paramount’s Instant Family with Mark Wahlberg and premiered Blow the Man Down, an official selection of the 2019 Tribeca Film Festival.

Martindale received the 2011 Emmy Award for Best Supporting Actress in a Drama Series for her tour de force performance as “Mags Bennett,” the diabolical matriarch of the FX drama, Justified. The role also earned her the Critics’ Choice Award for Supporting Actress in a Drama Series and a 2011 Television Critics Association Award nomination for Individual Achievement in Drama. USA Today described her performance as “smart, chilling, amusing, convincing and unfailingly entertaining,” and The Huffington Post called it “the television performance of the year!”

A native of Jacksonville, Texas, she began on the New York stage originating the iconic role of “Truvy” in the first Broadway production of Steel Magnolias. She also received a Tony® nomination for her portrayal of “Big Mama” in the 2004 revival of Tennessee Williams’ Cat on a Hot Tin Roof. Moviegoers will recognize her work in Million Dollar Baby, August: Osage County, Secretariat, Dead Man Walking, Nobody’s Fool, Lorenzo’s Oil, The Hours, Practical Magic, Walk Hard: The Dewey Cox Story, Hannah Montana: The Movie, Paris Je T’aime, Beautiful Creatures, The Hollars, Downsizing and Win Win among others. Her standout television performances include New Girl, Medium, Dexter, The Riches, Hung, A Gifted Man and The Millers.

Martindale resides in New York City with her husband, Bill. They are the parents of a daughter, Maggie.