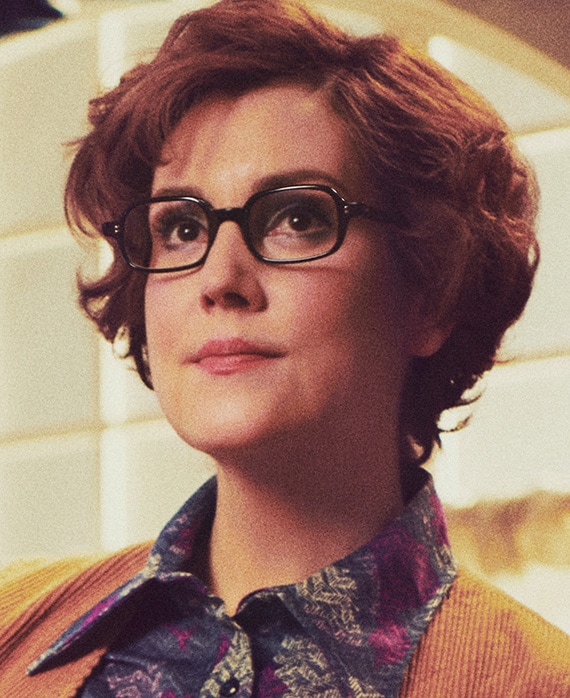 "Rosemary Thomson," portrayed by Melanie Lynskey, was a homemaker in Schlafly’s inner circle who eagerly joined her fight against the ERA, becoming President of the Illinois chapter of Stop ERA.

New Zealand-born Melanie Lynskey’s first role came in 1994 with her award-winning performance in Peter Jackson’s Heavenly Creatures opposite Kate Winslet. Since then, she has amassed several credits in both features and television. Her film credits include Steven Soderbergh’s The Informant, Tom McCarthy’s Win Win, Billy Ray’s Shattered Glass, Sam Mendes’ Away We Go, Jason Reitman’s Up in the Air, Andy Tennant’s Ever After and Sweet Home Alabama, Jamie Babbit’s But I’m a Cheerleader, Clint Eastwood’s Flags of Our Fathers, Joe Swanberg’s Happy Christmas and Angus MacLachlan’s Goodbye to All That.

In 2012, Lynskey played the lead role in Todd Louiso’s film Hello I Must Be Going. The film opened the 2012 Sundance Film Festival and was rated one of the Top Ten Independent Films of the year by the National Board of Review. Lynskey’s performance earned her critical praise and a nomination for a 2012 Gotham Independent Film Award in the category of Breakthrough Actor.

At Sundance in 2016, Lynskey won the U.S. Special Jury Prize for Individual Performance for her portrayal of a meddling alcoholic in Clea DuVall’s debut feature The Intervention.

Lynskey also starred opposite Elijah Wood in Macon Blair’s I Don't Feel at Home in This World Anymore, which won the Grand Jury Prize at Sundance. Lynskey was nominated for a 2017 Gotham Award for Best Actress for her role in the film.

On television, Lynskey most recently appeared in the Hulu series Castle Rock opposite André Holland, Sissy Spacek and Bill Skarsgård. She also starred in the Duplass brothers’ critically acclaimed HBO show, Togetherness, for which she was nominated for a Critics’ Choice Award; and she voiced the character “Beatrice” in Cartoon Network’s Over the Garden Wall, which won the 2015 Emmy® for Best Animated Program. She also starred opposite Anthony LaPaglia in the award-winning Australian SBS TV drama Sunshine Kings.