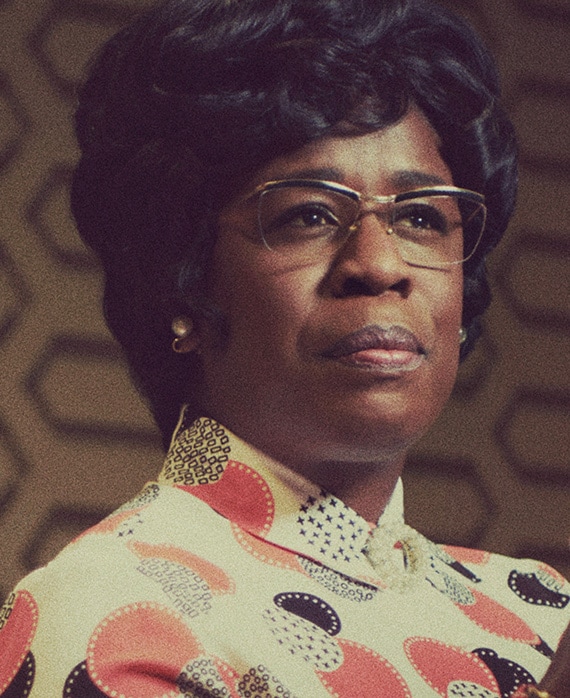 "Shirley Chisholm," portrayed by Uzo Aduba, not only made history as the first African American Congresswoman, but also became the first African American candidate to run for President from a national political party when she launched her unprecedented 1972 campaign. She was instrumental in getting the ERA passed in the House in 1971, and was a co-founding member of the National Women’s Political Caucus and the Congressional Black Caucus.

A formidable talent to be reckoned with, Aduba is an award-winning actress whose work spans television, film and theater.

Aduba recently finished her celebrated run as “Suzanne ‘Crazy Eyes’ Warren” in the critically acclaimed Netflix original series Orange Is the New Black. Her performance garnered a sweep of awards including the 2016 and 2015 SAG® Awards for Best Actress in Comedy, the 2017 SAG Award nomination for Best Actress in a Comedy, the 2015 Emmy® Award for Outstanding Supporting Actress in a Drama Series and the 2014 Emmy Award for Outstanding Guest Actress in a Comedy. In addition, Aduba was honored as part of the show’s win in the category of Best Ensemble in a Comedy at the 2017, 2016 and 2015 SAG Awards. For her Emmy wins, Aduba joined Ed Asner to become only the second actor ever to win Emmys for the same role in the comedy and drama categories. Furthermore, with her SAG and Emmy honors, she became the first African American actress to win the award in each category. She was also nominated for the 2015 and 2016 Golden Globe® Awards for Outstanding Supporting Actress in a Series, Mini-Series, or TV Movie.

Before starring on television, Aduba made her Broadway debut in Coram Boy in 2007 followed by the hit musical revival of Godspell in 2011. She discovered her talent for singing at a very early age and became a classical music major at the Boston University School of Fine Arts. Work in theater quickly followed with critically acclaimed performances at both The Huntington Theatre in Boston and A.R.T. where, under the direction of Diane Paulus, she won the prestigious Elliot Norton Award for Best Actress in a Play. She recently made her West End Theatre debut in The Jamie Lloyd Company's contemporary adaptation of Jean Genet's The Maids. Directed by Lloyd, the play also starred Laura Carmichael and Zawe Ashton.

Aduba was nominated for a Helen Hayes Award for Best Supporting Actress in a Play for her work in the Kennedy Center/Olney Theater production of Translations of Xhosa. Other theater credits include Dessa Rose at the New Repertory Theatre, Turnado: Rumble for the Ring at the Bay Street Theater and Abyssinia at the Goodspeed Theatre.