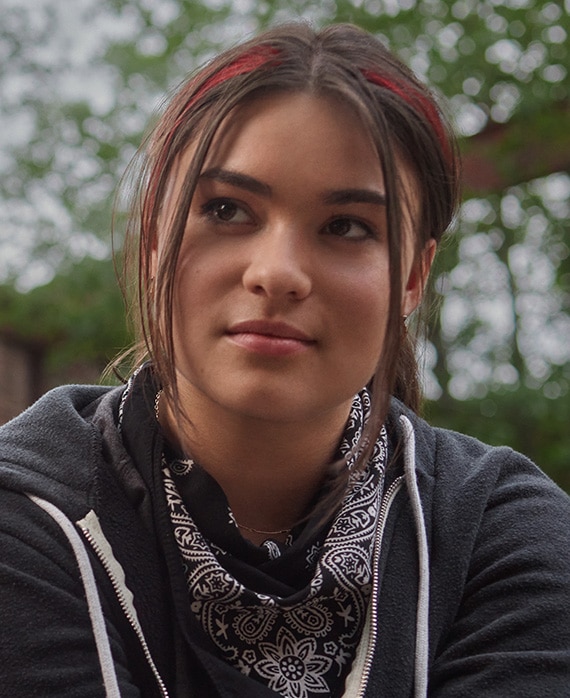 Elora Danan, portrayed by Devery Jacobs, is the moral center of the group. She isn’t afraid to make the hard decisions, but always ensures that the gang is cared for.

Jacobs was born and raised in Kahnawà:ke Mohawk Territory. Jacobs found her passion for the arts from a young age. Whether it was reenacting her favorite Disney movies or starring in summer plays at the Turtle Island Theatre Company on her reserve, she had her sights on the world of showbiz.

While pursuing her acting career, Jacobs also studied to be a counselor and worked at the Native Women’s Shelter of Montreal. It is this life experience, she credits, where she learned the depths of what human experiences can look like, making it the best training she could have received.

Jacobs would go on to attend the Canadian Film Centre’s (CFC) Acting Conservatory, an intensive six-month program that explores the different techniques of acting. Her first big break came when she was cast as the lead role in the award-winning feature film Rhymes for Young Ghouls, earning her a nomination for Best Performance by an Actress in a Leading Role at the 2014 Canadian Screen Awards.

Jacobs has amassed a significant body of work in several film and television productions including The Lie (Blumhouse Productions), Blood Quantum (Elevation Pictures), The Road Behind, Cold (go90) and This Life (CBC). She also won Best Performance in a Canadian Film at the 2016 Whistler Film Fest and Best Actress at the 2017 American Indian Film Fest for her work in the feature film, The Sun at Midnight. Most recently, Jacobs starred in season two of the hit Netflix series The Order, and the third season of American Gods (Amazon/Starz) based on author Neil Gaiman's novel. She also stars in the feature film Bootlegger, which follows the story of Jacobs’ character “Mani,” an ambitious lawyer in her 20s who heads back to her remote Indigenous community to help her people free themselves from outdated paternalistic laws. The film won Best Screenplay at Cannes’ Cinéfondation in 2017.

In 2017, The Hollywood Reporter named Jacobs one of Canada’s Rising Stars. In the same year, she was honored by Telefilm Canada at the 2017 Birks Diamond Tribute, celebrating women in film. Jacobs was given the title of TIFF Rising Star at the 2018 Toronto International Film Festival.

Jacobs has also explored the other side of the camera, with her directorial debut of the short film Stolen, which won Best Aboriginal Film at the 2017 Yorkton Film Festival. Her second short film Rae garnered the Best Youth Work prize at the ImagineNATIVE Film Festival. It was also an official selection of the 2018 Palm Springs Shortfest and was named one of the Best Female-Directed Films by Refinery29. The feature film This Place, co-written by Jacobs, was named a recipient of the Talent to Watch fund from Telefilm Canada. Currently, Jacobs is producing the film adaptation of the bestselling novel So Far From God.

Outside of acting and filmmaking, Jacobs is an avid reader, journals daily and is currently fulfilling her goal of continuing to learn her native language and taking Kanien’kéha (Mohawk) classes. A self-proclaimed foodie, Jacobs loves to try new and different restaurants, binge-watch cooking shows and search for interesting recipes on Pinterest.

Jacobs’ other passion lies in Indigenous rights activism. She was the original founder of the Kahnawà:ke Youth Forum where she led and organized protests and rallies. She was also an active participant in the Idle No More Movement. Most recently, Jacobs has been focusing her activism through her art, hoping to create change within communities and to alter the perspective of how Indigenous people are seen.