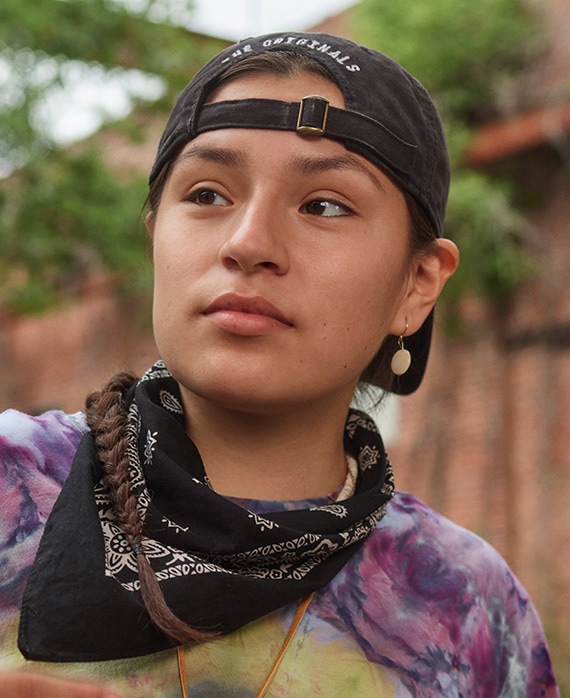 Willie Jack, portrayed by Paulina Jewel Alexis, is wise beyond her years. She marches to the beat of her own drum and is not bothered by what people think, always staying true to who she is. She’s the beating heart of the group and watches out for everyone.

Alexis is a Stoney tribe member of the Alexis Nakota Sioux Nation in central Alberta, Canada, where she was raised. The youngest of four children, Alexis is descended from a long line of cultural singers and artists, hunters, storytellers, filmmakers and scholars, and seemed destined to pursue a life in the arts. Her grandfather was the late Logan Alexis, a world-renowned round dance singer and song maker in Treaty Six Territory. And all three of her brothers are filmmakers and actors today.

Much of Alexis’ childhood involved making home movies with her siblings, where she was often cast in their amateur combat films in roles that had her jumping from rooftops, climbing power poles, barns and trees and wrestling. Alexis thrived on the action and still enjoys playing hockey, baseball, kickboxing and riding horses. She is also the lead singer in her family’s rock band. She aspires to one day star in an action film as a First Nation/Indigenous female super hero.

Alexis is known by family and friends to have a strong warrior but kind spirit, always willing to face any challenge the creator puts in front of her with the courage and love of her people. Her large family keeps her grounded and reminds her to always give thanks to the Creator and to her ancestors for the life she’s been given, to always be proud of who she is and where she came from and to always respect mother earth and all life around her.

Alexis’ Indian name is “Wagiya Cizhan,” which means “young female eagle,” and she will live her time exploring life and being resilient and true to herself.