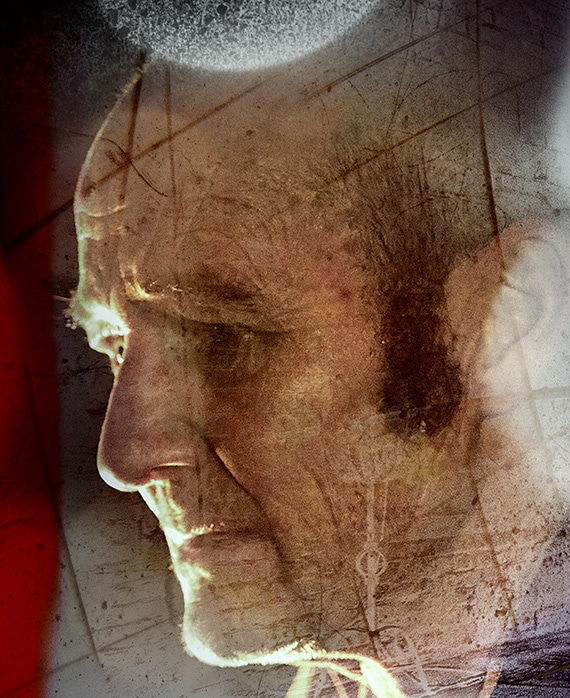 David Hayman stars as “Brace” in Taboo. He is well known for his role as “Chief Supt. Michael Walker” in Lynda La Plante’s long-running crime thriller Trial & Retribution, which had 12 series from 1997 to 2009.

Hayman was born in Bridgeton, Glasgow, Scotland. He studied at the Royal Scottish Academy of Music and Drama in Glasgow. He began his acting career at the Citizens Theatre in the city, playing a variety of roles, including “Hamlet,” “Figaro” and “Al Capone.” He gained national prominence playing notorious Barlinnie Prison convict turned sculptor, “Jimmy Boyle,” in the film A Sense of Freedom. His extensive list of film credits includes appearances supporting Pierce Brosnan in The Tailor of Panama, Bruce Willis in The Jackal and Kevin Spacey in Ordinary Decent Criminal. He also appeared in The Boy in the Striped Pyjamas as well as John Boorman’s Hope and Glory.

Hayman has also had success in directing film and TV productions. Silent Scream is a return to a study of convicts in Barlinnie Prison, examining the life of convicted murderer Larry Winters. It won the BAFTA Michael Powell award for best British film at the Edinburgh Film Festival and the Silver Bear and Special Jury Prize at Berlin. Hayman followed Silent Scream with The Hawk, starring Helen Mirren as a woman who begins to suspect that her husband is a serial killer. The Near Room is a dark and disturbing film about child abuse and corruption set in Glasgow. As a Broadcaster/Presenter he has fronted 24 Documentaries including In Search Of Series.

Hayman has appeared in Top Boy, London Spy and The Paradise. In September 2011, Hayman hosted the documentary In Search of Bible John, reconstructing the unsolved murders of Glasgow serial killer Bible John, who murdered three young women in the late 1960s. In 2012, Hayman played the “Earl of Worcester” in the BBC2 adaptation of Henry IV, Part I.

On stage, Hayman appeared as “Chris” in the 2011 production of Anna Christie at the Donmar Theatre, London. In 2012, he returned to the Citizens Theatre in Glasgow to play the title role in King Lear.

Hayman was awarded the City of Glasgow’s gold medal in 1992 for outstanding services to the performing arts. He also has four Honorary Doctorates. In 2001, he founded the humanitarian charity Spirit Aid, which is dedicated to children of the world whose lives have been devastated by war, genocide, poverty, abuse or lack of opportunity at home and abroad.