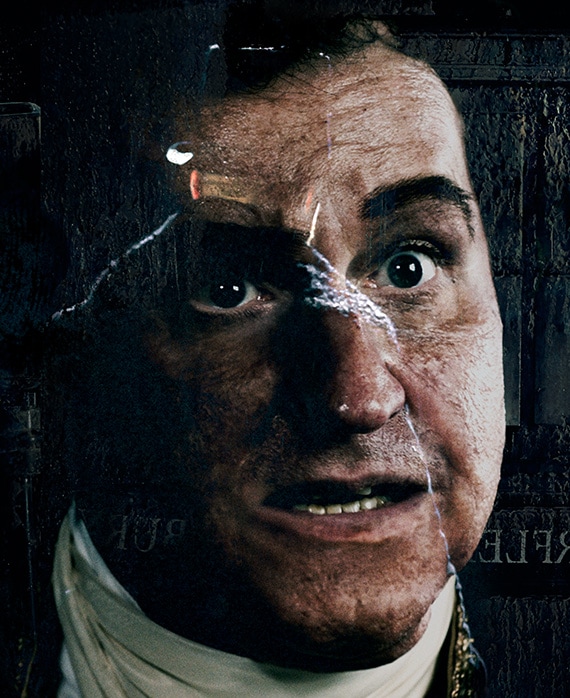 The English actor and comedian Mark Gatiss stars opposite Tom Hardy as the “Prince Regent.”

Gatiss is best known as a member of the award-winning comedy team The League of Gentlemen. Originating as a stage act, the team won the prestigious Perrier Comedy Award at the 1997 Edinburgh Festival Fringe. The team was commissioned by the BBC to produce a series on BBC Radio 4 in the same year, and then transferred to television in 1999. The series won numerous awards, including a BAFTA, The Royal Television Society Award and the prestigious Golden Rose of Montreux. The troupe also produced a film of the series, which was released in 2005.

Away from The League of Gentleman, Gatiss is one of the few to both write for and appear onscreen in Doctor Who, and is the only person to do so in the series’ modern revival. His numerous other acting credits include roles in London Spy, Spaced, Nighty Night, The Quartermass Experiment Live (2005), and The Wind in the Willows (2007). In 2010, Gatiss appeared as Boy George’s manager “Malcolm McLaren” in the BBC drama Worried About the Boy, as well as writing and appearing in an adaptation of HG Wells’ The First Men in the Moon. In the same year he created, wrote and acted in Sherlock as “Mycroft Holmes,” and wrote and presented A History of Horror, a personal documentary series exploring the film genre. Gatiss continues to play the role of “Mycroft” and script the series, and has made appearances in numerous other series including Being Human, Game of Thrones and Wolf Hall.

On stage, Gatiss has appeared at the Old Vic in an adaptation of Pedro Almodovar’s All About My Mother, and in Season’s Greetings at the National Theatre alongside Catherine Tate. In 2012 he appeared in the Donmar Warehouse production of George Farquhar’s play The Recruiting Officer, and the Hampstead Theatre production of 55 Days as “Charles I.” In 2013, Gatiss appeared as “Menenius” opposite Tom Hiddleston in the Donmar Warehouse’s critically acclaimed production of William Shakespeare’s Coriolanus. He also starred in Patrick Marber’s Three Days in the Country – for which he won an Olivier.