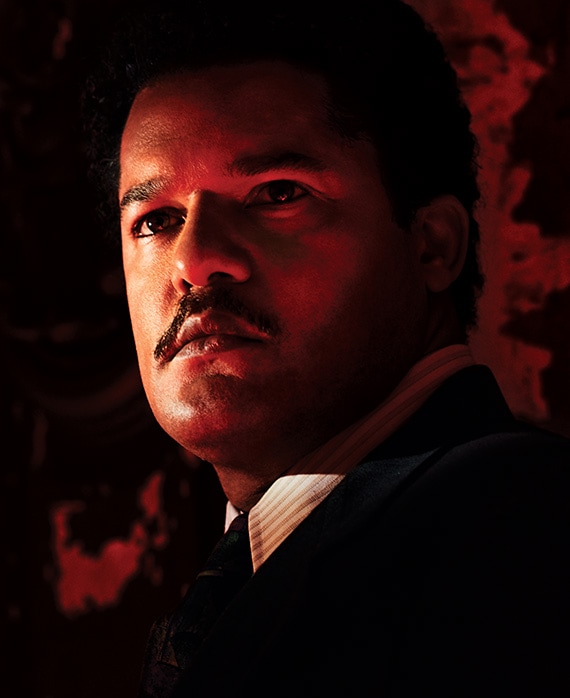 Agent “Dennis Aderholt,” played by Brandon J. Dirden, now leads the FBI’s Counterintelligence division, where he brings a wealth of experience to the battle against the KGB. Although he no longer works with his old friend and colleague, Stan Beeman, they still share one last important case that’s threatening to come apart at the seams.

Dirden made his professional acting debut at the age of 12 in a production of August Wilson’s play Joe Turner’s Come and Gone at the Alley Theatre in his hometown of Houston, Texas. While Dirden knew at a young age what career path he wanted to pursue, his father, Houstonian actor, Willie Dirden, encouraged him to explore other options. So Dirden attended the famed Morehouse College in Atlanta, studying mathematics and engineering. While at Morehouse, he also took theater courses and acted in several plays at the neighboring Spelman College. Dirden went on to earn a Masters of Fine Arts in Acting from The University of Illinois at Urbana-Champaign.

In 2006, Dirden moved to New York City, where he quickly became a mainstay in the Broadway, Off Broadway and regional theater scenes. On Broadway, his credits include the 2014 Tony® Award-winning play All the Way, in which he starred as Martin Luther King Jr. opposite Bryan Cranston’s Lyndon Johnson. Dirden also appeared on Broadway in the Tony® Award-winning play Clybourne Park alongside his wife, Crystal Dickinson. Off-Broadway credits include The First Breeze of Summer and Day of Absence (Signature Theatre); Detroit ’67 (Public Theater &; Classical Theatre of Harlem) and Peter and the Starcatcher (New York Theatre Workshop).

Dirden also frequently acts with his younger brother, Jason Dirden. In 2012, they starred together in the Pulitzer Prize-winning play Topdog/Underdog at Two River Theater, directed by its author Suzan-Lori Parks. Later that year they performed together in the highly-acclaimed revival of August Wilson's The Piano Lesson at the Signature Theatre in New York, directed by Ruben Santiago-Hudson. For that performance, Dirden was honored with Obie, AUDELCO and Theatre World awards. In 2017 Dirden returned to Broadway in the Tony®-winning Broadway premiere of August Wilson's Jitney, also under the direction of Ruben Santiago-Hudson.

Television audiences may also recognize Dirden from his guest-starring turns on The Good Wife, The Big C, Tyler Perry's House of Payne, Public Morals and Brain Dead. You can also see him in Baz Luhrmann’s The Get Down on Netflix as the strict but well-meaning “Leon.”

Dirden now makes his home in New Jersey with his wife and their son Chase.