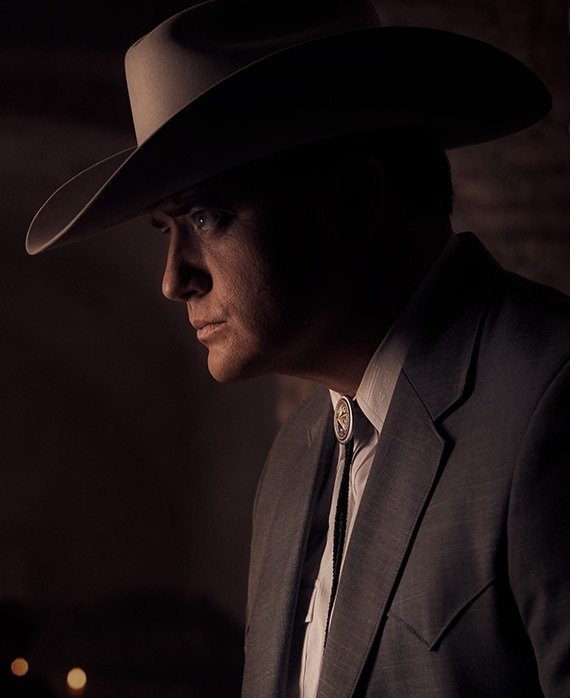 Brendan Fraser stars as James Fletcher Chace in the dynastic saga Trust. Inspired by actual events, FX’s new drama series delves into the trials and triumphs of one of America’s wealthiest and unhappiest families, the Gettys.

Fraser continues to garner widespread critical acclaim for his versatile and inspired performances as well as his keen eye for selecting thought-provoking material. He seamlessly transitions from smart independent films to action-packed blockbusters.

Upcoming projects for Fraser include Condor, where he will play “Nathan Flower,” an unstable yet efficient central cog in an unholy alliance between the private military company that employs him and the CIA. Condor is set for release in 2018.

Fraser was most recently seen in the third season of Showtime’s award-winning TV show, The Affair, where he played “Gunther,” a menacing security guard in the prison where “Noah Solloway” (Dominic West) is incarcerated. Season 3 of The Affair premiered on November 20, 2016.

Other recent projects include The Field, a classic crime narrative which merges a dysfunctional, mafia family at war with each other as an undercover officer plots their downfall. Fraser played an arms dealer in this independent feature. He was also seen in the A&E miniseries, Texas Rising, starring alongside Bill Paxton, Ray Liotta, Jeffrey Dean Morgan and Olivier Martinez. Fraser also previously starred in the feature, Gimme Shelter, opposite Rosario Dawson and Vanessa Hudgens; voiced characters in two animated films as “Scorch Supernova” in The Weinstein Company’s Escape from Planet Earth; Open Road Films’ The Nut Job, with Will Arnett and Katherine Heigl; and Whole Lotta Sole, a heist comedy directed by Terry George in which Fraser starred and served as Executive Producer.

Fraser made his Broadway debut starring in the comedy Elling, based on the Norwegian novels by Ingvar Ambjørnsen. In 2010, he was also seen in Summit Entertainment’s family comedy Furry Vengeance and Extraordinary Measures, a true story based on the efforts of John and Aileen Crowley to find a researcher who might have a cure for their two children’s rare genetic disorder.

In 2008, Fraser had an incredible summer at the box office. The New Line/Warner Bros. release of Journey to the Center of the Earth in 3D, which he starred in and also served as Executive Producer, grossed more than $100 million domestically. In Journey to the Center of the Earth, Fraser portrayed an archaeologist who finds himself on an adventure to the center of the Earth with his nephew (Josh Hutcherson) and a scientist (Anita Briem) in search of his missing brother. The film is the first live-action feature filmed entirely in 3D.

Fraser is most well-known for his role in Universal’s Mummy franchise as “Rick O’Connell.” Stephen Sommers’ 1999 smash hit action/horror adventure, The Mummy, was an ambitious retooling of the 1932 horror classic, with Fraser cast as an American serving in the French Foreign Legion who becomes involved with an English archaeological expedition and the ancient secrets they unleash. In 2001, Fraser reteamed with Sommers and co-star Rachel Weisz on the film’s sequel, The Mummy Returns. In 2008, Universal released Mummy 3: Tomb of the Dragon Emperor. The Mummy franchise has grossed $1.415 billion worldwide to date.

Fraser has been in a string of some of the most successful independent films of the past decade including Lionsgate’s Academy Award winning Best Picture Crash, directed by Paul Haggis; Phillip Noyce’s The Quiet American, based on Graham Greene’s 1955 thriller of the same name; and Bill Condon’s Gods and Monsters, opposite Sir Ian McKellen and Lynn Redgrave.

Other credits for Fraser include Inkheart, G.I. Joe: The Rise of Cobra, The Air I Breathe, George of the Jungle, Looney Tunes: Back in Action, Bedazzled, Monkey Bone, Blast From the Past, Dudley Do-Right, Mrs. Winterbourne, Encino Man, School Ties, With Honors, Airheads, The Scout, and The Twilight of the Golds.

Fraser’s diverse theater roster includes his 2001 appearance at the Lyric Theatre on Shaftesbury Avenue, in London in the West End production of Tennessee Williams’ Cat on a Hot Tin Roof. He also received high praise for his work as the anxious writer in John Patrick Shanley’s Four Dogs and a Bone at the Geffen Playhouse in which he co-starred with Martin Short, Parker Posey, and Elizabeth Perkins for director Lawrence Kasdan.

Born in Indianapolis and raised in Europe and Canada, Fraser has been dedicated to honing his craft since the age of 12 and began attending theater when his family lived in London. He attended high school at Toronto’s Upper Canada College and received a BFA in acting from the Actor’s Conservatory, Cornish College of the Arts in Seattle.