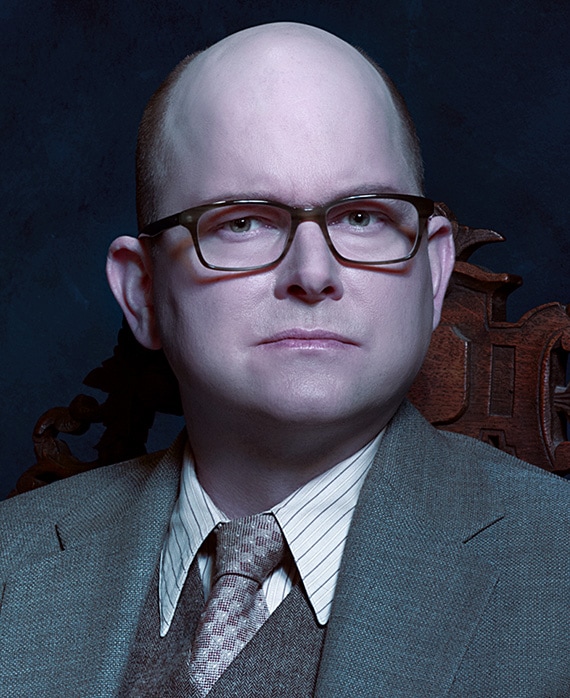 Very much a Dilbert-looking-guy, "Colin Robinson," played by Mark Proksch, enjoys community theater, writing his travel blog, and blocking the Lincoln Tunnel with his classic convertible. He is the owner of many beige suits and has at least five laptops for online trolling. Although he’s not quite sure what his deal is as an emotional vampire, he is determined to find out before his rapidly approaching 100th birthday arrives.

Proksch is an actor, writer and comedian who stars in the Emmy®-nominated FX comedy series What We Do in the Shadows based on the acclaimed film. His other TV credits include recurring roles on the Emmy-nominated series Better Call Saul and The Office.

Proksch was cast in The Office off of his appearances on morning newscasts as self-proclaimed yo-yo master, Kenny “K-Strass” Strasser. Paste Magazine dubbed the performances "the funniest thing that's ever happened."

He has also appeared in memorable roles on This Is Us, Modern Family, Portlandia, Drunk History, Room 104, New Girl, Hello Ladies and most recently Showtime’s Black Monday. He regularly appears with Tim Heidecker on the cult favorite On Cinema.

Proksch is a talented voice actor who has voiced characters in Bob’s Burgers, Adventure Time and Apollo Gauntlet, as well as the Stephen Merchant-produced series Dream Corp LLC for Adult Swim. He will next be lending his voice to roles in the animated series 10-Year-Old-Tom (HBO Max) and The Great North (Amazon).