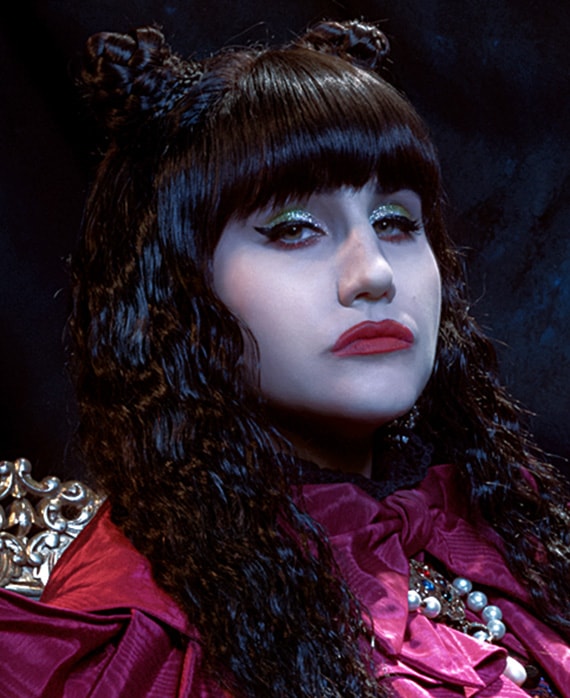 While "Nadja," played by Natasia Demetriou, has been in a centuries-long marriage with Laszlo, she now has an additional (and fun-sized) partner-in-crime: her dolly that contains her own spirit. Nadja’s doll is a constant reminder for her to live a more productive vampire life. Will Nadja become more than just a gifted singer and lyricist known for hits such as “Hoop Skirt Poop Skirt” and “Witches Are Snitches”?

Demetriou is a writer, actor and character comedian.

For her performance as “Nadja” in the Emmy®-nominated vampire comedy, What We Do in the Shadows, Demetriou received a Critics' Choice Television Award nomination and won the Best Actress in a Science Fiction/Fantasy Series Award at the Critics’ Choice Super Awards.

Demetriou stars as “Sophie” in the critically acclaimed comedy series Stath Lets Flats for Channel 4. Written by and starring her brother, Jamie Demetriou, Stath was nominated for two BAFTA Awards in 2019 and won three BAFTA Awards in 2020.

She starred in the second season of the hit BBC One series This Time with Alan Partridge, Eurovision, Urban Myths: Andy & The Donald and the comedy feature The Festival. Her additional acting credits include The Road to Brexit, Static, Sick Note, Wasteman, Morgana Robinson’s The Agency, Oh God and Coaches.

Demetriou co-hosted The Big Flower Fight with Vic Reeves for Netflix in 2020. She has appeared as herself in several programs including The Big Fat Quiz, Comedians Giving Lectures and Don’t Hate the Playaz. Other comedy entertainment credits include Go 8-Bit, The Chris Ramsey Show and Harry Hill’s Tea Time. She was a regular writer on ITV’s The Nightly Show and served as a writer and performer on ITV2’s current affairs focused show @Elevenish.

Ellie & Natasia, the 2019 sketch comedy Demetriou and her comedy partner Ellie White wrote and starred in for the BBC, received huge critical acclaim. The pair have written a full six-part series, which will be filming soon. Their live comedy show, Natasia Demetriou and Ellie White are Gettin' Big, had a sold-out run at the Soho Theatre in 2018. Earlier that year, the comedy duo performed one of their sketches “Mum’s the Word” on the smash hit British Channel 4 comedy panel show 8 Out of 10 Cats Does Countdown.

Demetriou also co-wrote and starred in the critically acclaimed BBC3 Comedy Feed People Time. Her 2014 debut solo Edinburgh show, You'll Never Have All of Me, won the Skinny Debutant Award.

She is currently in the process of writing a feature for Film4, alongside writing several projects for television.