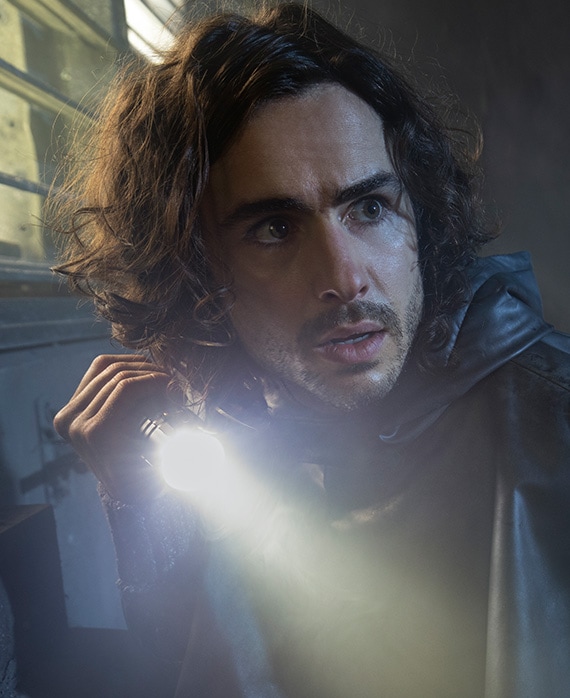 An aspiring escape artist, "Yorick Brown," portrayed by Ben Schnetzer, barely scrapes by teaching magic to wealthy kids. Overshadowed by his impressive parents and reckless sister, Yorick took on the role of people pleaser, confidant and class clown. Now an adult, his goofball persona is wearing thin and he can't even begin to unpack the emotional scars it helps him ignore. He's an old school romantic, deeply in love with his high school sweetheart and desperate to reunite with her when disaster causes their separation.

Schnetzer was last seen starring on Broadway in The Nap, a Daniel Sullivan-directed production at the Manhattan Theatre Club. The play follows “Dylan Spokes,” a young snooker player in a championship tournament only to be confronted by the authorities warning him of the repercussions of match fixing.

In 2016, Schnetzer was seen in Andrew Neel’s Goat opposite Nick Jonas. Prior to that, he was seen in Golden Globe® nominated Pride, directed by Matthew Warchus alongside a cast including Bill Nighy, Imelda Staunton and Dominic West.

On television, Schnetzer was seen on Jean-Jacques Annaud’s 10-part MGM series The Truth About the Harry Quebert Affair, opposite Patrick Dempsey and Kristine Froseth.

First making his film debut in the indie drama Ben's Plan, Schnetzer played the lead role of “Ben Stephens,” a 14-year-old boy living in New York whose mother disappeared. From there, he went on to appear as a series-regular on ABC’s Happy Town.

Schnetzer studied at the Guildhall School of Music & Drama in London where he appeared in numerous productions including Oedipus, As You Like It, Merrily We Roll Along and Widowers’ Houses, among many other stage credits. He first began acting at age 11 when he played the “Artful Dodger” in a production of Oliver.