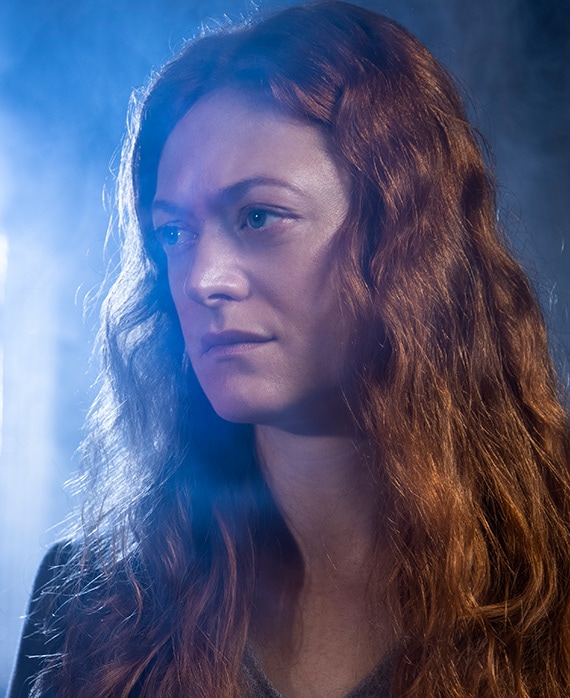 A press advisor to a Republican president, "Nora Brady," portrayed by Marin Ireland, is pragmatic, hard-working and deferential, even when it makes her angry. And it often does. She spent her career advising charming politicians (mostly men) whom she is smarter than. Nora has accumulated markers of success—a White House job, the perfect husband, two kids, but none of it feels like enough. After a global disaster, Nora struggles to survive with her preteen daughter, discovering an untapped well of resolve she didn’t know she had.

Ireland is a veteran stage, film and TV actress, best known for her starring role as “Julia Bowman” in Amazon Studios’ Sneaky Pete, which premiered its third and final season in 2019. Ireland most recently appeared alongside Elliot Page in the second season of the hit fantasy comic-book series The Umbrella Academy on Netflix, which premiered on July 31, 2020 and became the most watched streaming show across all platforms for the month of August 2020.

In 2019, Ireland wrapped a limited Off-Broadway production of Abby Rosebrock’s Blue Ridge, where her portrayal of “Allison” has made Ireland a standout actress, with The New York Times naming her “one of New York Theater’s most inspired and entertaining interpreters.”

Ireland’s other theater credits include Reasons to Be Pretty, for which she won a Theatre World Award and was nominated for a Tony® Award in the category of Best Performance by a Featured Actress in Play. Her other New York credits include Summer and Smoke and Three Sisters at Classic Stage Company, Ironbound at David Geffen Hall and Rattlestick Playwrights Theater, The Big Knife on Broadway (opposite Bobby Cannavale), Kill Floor at Lincoln Center, Blasted and Marie Antoinette, both at Soho Repertory Theater, Cyclone at Studio Dante (Obie Award) and In the Wake at The Public Theater.

Some of her other TV and film credits include: Light From Light (Sundance Film Festival 2019), The Dark and the Wicked, Flint, Girls, Homeland, Masters of Sex, The Divide The Slap, Glass Chin (2016 Film Independent Spirit Award nomination), Sparrows Dance, The Family Fang, 28 Hotel Rooms, In the Radiant City and Hell or High Water.