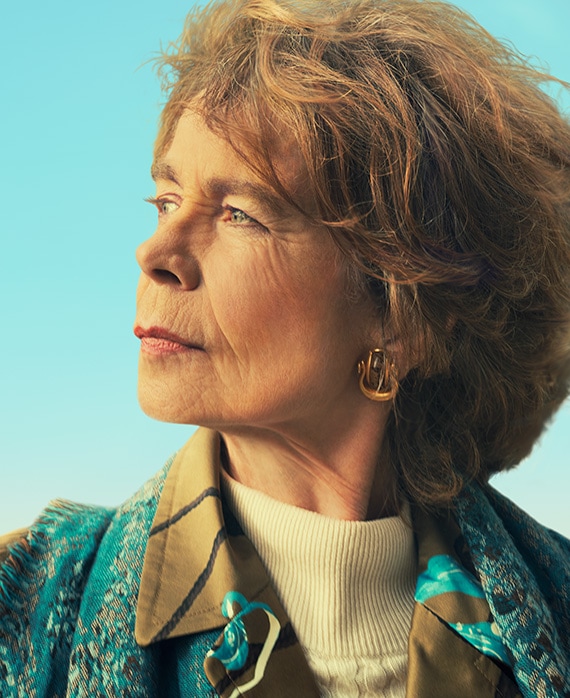 Celia Imrie plays “Phil,” Sam's eccentric British mother who is rediscovering herself as she comes to terms with her own mortality.

Imrie is an Olivier award-winning and Screen Actors Guild-nominated actress. She was honored by Variety as an “Icon” and received the Lifetime Achievement Award at the Women in Film and Television Awards. In addition to her acclaimed film, television and theater work, she is also a Sunday Times bestselling author. She recently released her first-ever non-fiction novel Orphans of the Storm.

Imrie is much loved for her film roles, including The Best Exotic Marigold Hotel series, the Bridget Jones series, Nanny McPhee, Calendar Girls, Absolutely Fabulous: The Movie, Finding Your Feet and Mamma Mia: Here We Go Again. She took on darker roles in A Cure for Wellness and in Netflix’s Malevolent, a horror feature based on the novella by E.M. Blomqvist. She also starred in the independent feature Love Sarah. Last year, she joined the cast of Keeping Faith for its third series and will soon be seen in Charles Dance’s directorial debut, The Inn at the Edge of the World.

Her theater work includes The Sea with Dame Judi Dench, King Lear with Glenda Jackson and The Hothouse with Harold Pinter.

Imrie effortlessly made the transition from being a beloved actress to a talented novelist. Her debut novel Not Quite Nice, published by Bloomsbury in 2015, appeared in the Sunday Times’ Top Ten for six weeks and was cited as a “delicious piece of entertainment.” It also reached number five in the Apple iBook chart and number eight in Amazon’s book chart. Her second novel Nice Work (If You Can Get It) was published in February 2016 and her third, Sail Away, was published in February 2018. Her next work, A Nice Cup of Tea was published last summer. Her autobiography is entitled The Happy Hoofer.