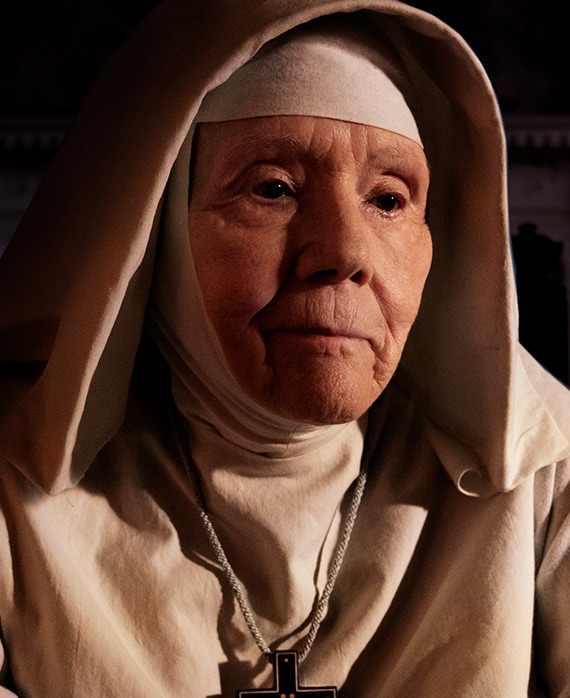 Diana Rigg portrays "Mother Dorothea," the Mother Superior at the convent in Darjeeling. Mother Dorothea offers guidance to Sister Clodagh to help her efforts at Mopu.

Throughout her illustrious career, Rigg received many accolades, including Tony® and Evening Standard Awards for Best Actress playing the title role in Medea at the West End’s Almeida and on Broadway. Beyond this, Rigg’s extensive list of theater credits include My Fair Lady (Lincoln Center Theater), Pygmalion (Garrick Theatre), Hayfever and The Cherry Orchard (Chichester Festival Theatre). Her additional stage credits include Mother Courage, Humble Boy, The Misanthrope, Tom Stoppard’s Jumpers, Phaedra Britannica and The Hollow Crown at the National Theatre, as well as roles in Twelfth Night, King Lear and Macbeth with the Royal Shakespeare Company.

In addition to her wide-ranging theatrical credits, on television Rigg earned an Emmy® Award for Best Supporting Actress for her role as “Mrs. Danvers” in Rebecca, an Emmy-nomination for Outstanding Guest Actress in a Drama Series for her role as “Olenna Tyrell” in Game of Thrones and a BAFTA Award for Best Actress as “Helena Vesey” in the 1989 series Mother Love. Other television credits include All Creatures Great and Small, Victoria, Professor Branestawm Returns, Penn Zero: Part-Time Hero, You, Me and the Apocalypse, Detectorists (series two and three), Doctor Who, Extras, Charles II, Murder in Mind, Victoria and Albert, Mrs. Bradley Mysteries, The American, Unexplained Laughter, King Lear, Hedda Gabler and the wildly popular 1960s adventure series The Avengers where she portrayed “Emma Peel.”

Rigg’s list of film credits include Last Night in Soho, The Painted Veil, Heidi, Parting Shots, In the Beginning, A Good Man in Africa, Evil Under the Sun, A Little Night Music, The Hospital and On Her Majesty’s Secret Service playing “Tracy Bond.”