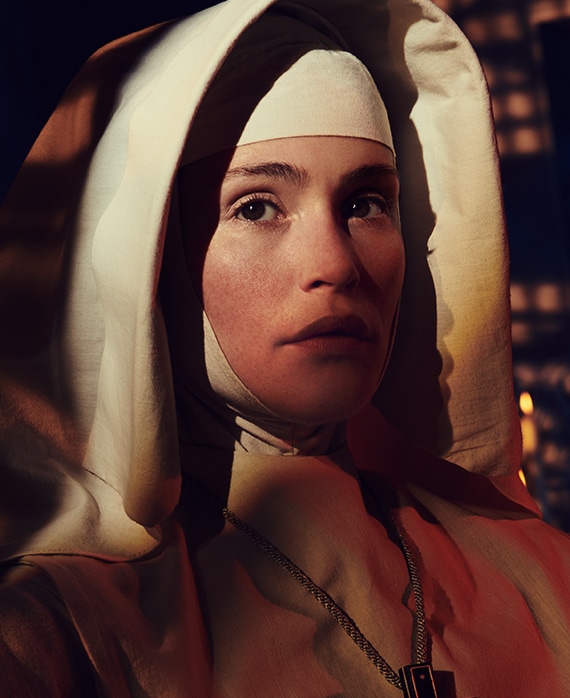 Gemma Arterton stars as "Sister Clodagh," the leader of the Sisters of St. Faith and the youngest Sister Superior of the Order. Driven and ambitious, Clodagh is determined to succeed at Mopu where others have failed.

British actress Arterton is well-known for her stage and screen presence, having established herself through dynamic projects and roles throughout her career. In recent years she’s expanded into producing and founded her production company Rebel Park Productions alongside Jessica Malik and Jessica Parker.

Arterton has a plethora of recent and upcoming projects that further demonstrate her versatility. She was most recently seen in Jessica Swale’s directorial debut film Summerland as “Alice,” a reclusive writer who has her life upended when an evacuee from the London Blitz is left in her care. Swale also penned the screenplay for the film, which was released by IFC Films in July 2020 (U.S.). Forthcoming is Matthew Vaughn’s highly anticipated The King’s Man, a World War I-era prequel to the fan favorite Kingsmen series. Arterton plays “Polly” and joins a stellar cast including Ralph Fiennes, rising star Harris Dickinson, Charles Dance and Rhys Ifans.

Arterton previously starred as Vita Sackville-West in Chanya Button’s biopic Vita & Virginia, telling the true story of the love affair between Vita and literary icon Virginia Woolf (Elizabeth Debicki). She was also seen in the Netflix comedy Murder Mystery, alongside an all-star cast including Adam Sandler, Jennifer Aniston, Luke Evans and David Walliams. Additionally, she appeared in Julie Delpy’s My Zoe opposite Daniel Brühl and lent her voice to the family animated film SpaceDog and Turbocat.

Additional notable film and television credits include The Escape, Watership Down, Their Finest, A Hundred Streets, The History of Love, The Girl with All the Gifts, Hansel & Gretel: Witch Hunters, Runner Runner, The Voices, Tamara Drewe, Clash of the Titans, Prince of Persia: The Sands of Time, The Disappearance of Alice Creed, The Boat that Rocked, Quantum of Solace, RocknRolla, Three and Out, St. Trinian’s, Tess of the D’Urbervilles, Lost in Austen and Capturing Mary. She was also seen starring in French language films Gemma Bovery and Orpheline.

On stage, Arterton was last seen at the Donmar Warehouse in Josie Rourke’s Saint Joan, a production of Bernard Shaw’s classic play. Prior to that, she took on the title role in Nell Gwynn at London’s Apollo Theatre, a role which gained her an Olivier Award nomination for Best Actress. She received her first Olivier Award nomination for her performance in the hit West End musical version of the 2010 film Made in Dagenham at the Adelphi Theatre. Additional theatre credits include The Little Dog Laughed, The Master Builder, The Duchess of Malfi and Love’s Labour’s Lost.

After receiving an award for Best Supporting Actress while at acting college, she gained a full scholarship to the Royal Academy of Dramatic Arts (RADA) where she took lead roles in productions such as An Ideal Husband, Titus Andronicus and The Beggar’s Opera.