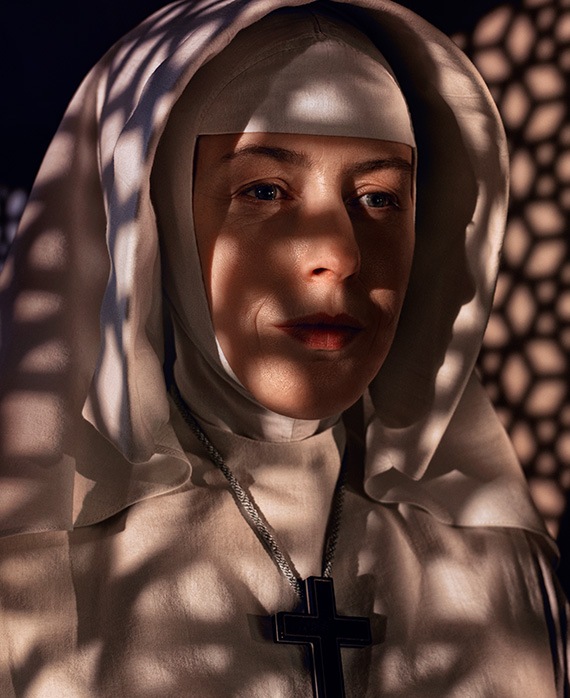 Gina McKee portrays "Sister Adela," an old-fashioned nun who was wounded in an uprising in Canton, China. Adela is committed to the discipline of the sisterhood.

McKee has enjoyed a varied acting career both on stage and on screen. Her feature film work includes roles in Atonement, Wonderland and Notting Hill. In Phantom Thread, McKee played the role of “Countess Henrietta Harding” for the romantic drama directed by Paul Thomas Anderson. McKee also starred alongside Tom Hollander and Peter Capaldi for her role in In the Loop.

McKee has been even busier on the television front. She was in the BBC hit TV series The Bodyguard, playing “Commander Anne Sampson,” the HBO series Catherine the Great as Countess Praskovya Bruce and Starz’s The Rook as “Jennifer Birch.” Other TV credits include her role in Hebburn which won an RTS award, The Borgias, Line of Duty, The Street, The Lost Prince, The Forsyte Saga, Brass Eye and Our Friends in the North, for which McKee won the BAFTA Award for Best Actress.

Alongside a career on screen McKee’s stage appearances at The Donmar Warehouse include Faith Healer, King Lear, which was nominated for an Olivier Award and Old Times. Other productions include The Mother, Di and Viv and Rose and Richard III in the West End, Ivanov, The Lover/The Collection and Aristocrats for The National Theatre.