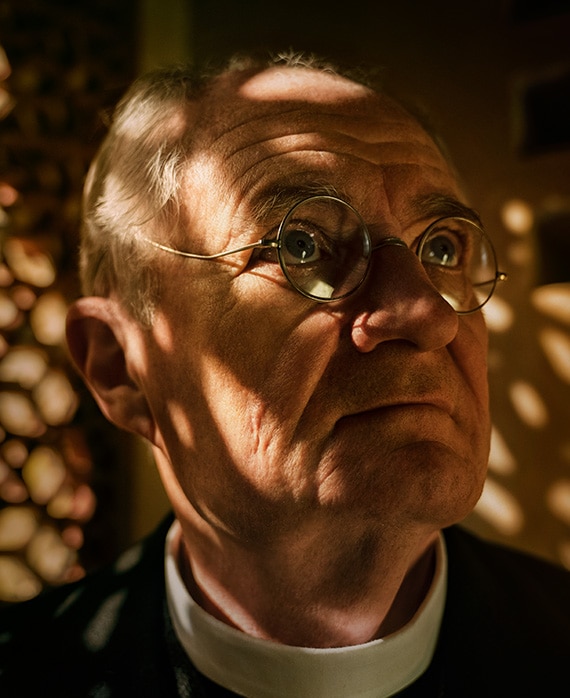 Jim Broadbent portrays "Father Roberts," a priest based in Darjeeling. Father Roberts travels to oversee the nuns’ progress at Mopu.

Broadbent is an Academy Award®, BAFTA, Emmy® and Golden Globe®-winning theater, film and television actor, best known for roles in Iris (for which he won Best Supporting Actor at the Academy Awards and the Golden Globes in 2001), Moulin Rouge (for which he was awarded the BAFTA for performance in a Supporting Role in 2001) and the international phenomenon Harry Potter franchise. He was BAFTA-nominated most recently for his role alongside Meryl Streep in The Iron Lady. Broadbent has since continued to appear in an eclectic mix of projects, including John S. Baird’s scurrilous Irvine Welsh adaptation Filth, Roger Michell’s romantic comedy drama Le Week-End (for which he was nominated for a British Independent Film Award for Best Actor) and The Harry Hill Movie, in which he appeared in drag as a three-armed cleaning lady. More recently Broadbent has starred in Christopher Smith’s Christmas comedy Get Santa, Paul King’s critically acclaimed Paddington film series based on the beloved children’s books by Michael Bond, Nicholas Hytner’s Lady in The Van, Sharon Maguire’s Bridget Jones’s Baby and Ritesh Batra’s The Sense of an Ending.

Since his film debut in 1978, Broadbent has appeared in countless successful and acclaimed films, establishing a long-running collaboration with Mike Leigh (Life Is Sweet, Topsy-Turvy, Vera Drake and Another Year) and demonstrating his talents as a character actor in films as diverse as The Crying Game, Bullets Over Broadway, Little Voice, Bridget Jones’s Diary, Hot Fuzz, The Damned United and Cloud Atlas.

Honored for his extensive work on television, Broadbent has received a Royal Television Society Award and BAFTA nomination for his leading performance in Any Human Heart, based on William Boyd’s novel of the same name. He had previously been recognized for his performance in Tom Hooper’s Longford, winning a BAFTA and a Golden Globe, and his performance in The Street for which he won an Emmy. His earlier role in The Gathering Storm had earned him Golden Globe and Emmy nominations. Other selected credits include Birth of a Nation, Blackadder, Only Fools and Horses, Victoria Wood as Seen on TV, The Young Visiters, Einstein and Eddington, Exile, The Great Train Robbery and London Spy.

Having studied at the London Academy of Music and Dramatic Art, Broadbent has also appeared extensively on the stage, notably with the Royal National Theatre and the Royal Shakespeare Company. His work on the stage has seen him appear in acclaimed productions ranging from Our Friends In The North by Peter Flannery at the RSC Pit Theatre and A Place with the Pigs by Athol Fugard at The National, through to Habeas Corpus by Alan Bennett at the Donmar Warehouse and The Pillowman by Martin McDonagh at The National. He also starred in Martin McDonagh's play A Very Very Very Dark Matter at the Bridge Theatre.