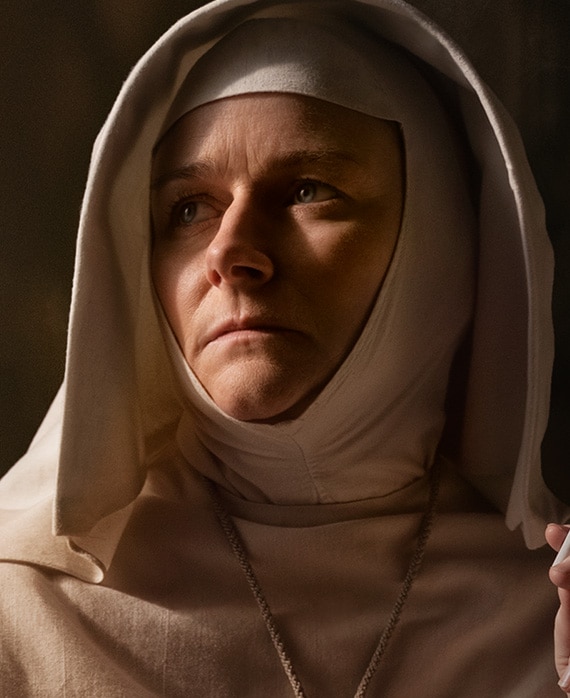 Rosie Cavaliero portrays "Sister Briony," the most senior of the Sisters under Clodagh. Briony is her reliable right hand. She organizes supplies and medicines.

Cavaliero is a British actress who has been featured in countless roles spanning across television, film and theater. She appeared in the Academy Award®-nominated Jane Eyre, HBO’s BAFTA-nominated Gentleman Jack, and the BIFA-nominated Breathe, directed by Andy Serkis and starring Andrew Garfield.

On television, Cavaliero starred in ITV hit crime thriller Prey (series one and two), which was nominated in 2015 for a BAFTA Television Award for Best Miniseries. She can also be seen in the BATFA-nominated comedy Hunderby, Cleaning Up, Unforgotten, Professor Branestawn, Death in Paradise, Nurse, Inside No. 9, The Crimson Petal and the White, Lark Rise to Candleford, Little Dorrit, Hold the Sunset and Jam & Jerusalem, to name a few from her repertoire.

In film, Cavaliero recently wrapped production on comedic Higher Ground starring Kate Nash premiering next year in the U.K. She has appeared in In the Cloud, The Children Act starring Emma Thompson, Nativity! and Nativity 2: Danger in the Manger, Vera Drake, Scoop, Tristram Shandy: A Cock and Bull Story and Topsy-Turvy among others.