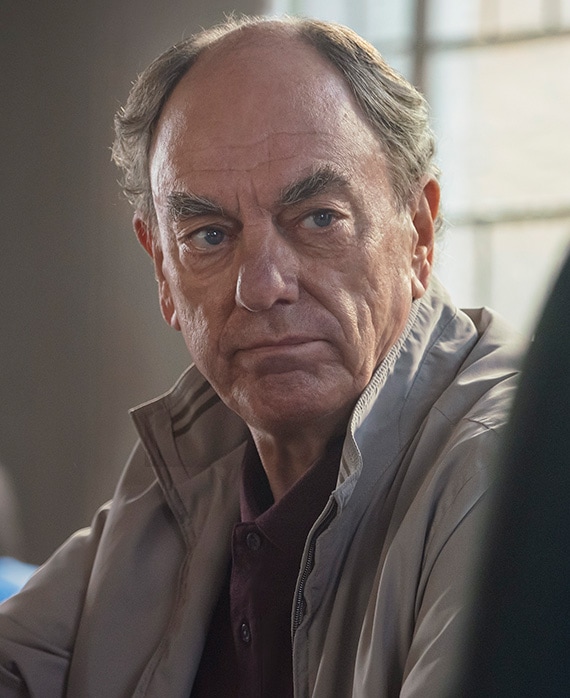 Solid, dependable and happily married to Jackie for 50 years, "Jim," portrayed by Alun Armstrong, is bemused by modern parenting and epitomizes old-school male values. He loves his wife, son Paul, daughter-in-law Ally and his grandchildren, but can obviously never tell them.

Armstrong is an English actor with a long and storied career in film, television and theater. Armstrong has appeared in Mel Gibson’s Braveheart, Tim Burton’s Sleepy Hollow, Clint Eastwood’s White Hunter Black Heart and The Mummy Returns for Universal Pictures. His additional film credits include Cordelia, Possum, Funny Cow, Krull, Oliver Twist, Van Helsing, Strictly Sinatra and Eragon. He also appeared in This Is Personal: The Hunt for the Yorkshire Ripper, which received a BAFTA® nomination for Best Drama Serial.

Armstrong is truly no stranger to television. In addition to his role as “Jim” in FX’s Breeders, he has appeared in Prime Suspect 1973 and Dark Angel. He has had recurring roles in New Tricks and Garrow’s Law for the BBC, as well as Bleak House, based on the Charles Dickens’ novel of the same name. Further television credits include Downton Abbey, Penny Dreadful, Married… with Children and Frontier alongside Jason Momoa.

Armstrong is also an experienced and successful theater thespian, being nominated for the Laurence Olivier Award for Best Actor six times. In 1994, he won the award for Best Actor in a Musical as the title character in Sweeney Todd at the National Theatre. His appearances in the National Theatre also include the role of “Willy Loman” in Death of a Salesman and “The Captain” in The Father. Armstrong spent over nine years with the Royal Shakespeare Company and has performed at The Old Vic, Royal Shakespeare Theatre, Barbican Theatre, Royal Albert Hall and on Broadway in countless productions including in Les Misérables, The Life and Adventures of Nicholas Nickleby, Troilus and Cressida, The Winter’s Tale, The Tempest, The Crucible and The Taming of the Shrew, among many others.

Armstrong took part in the National Youth Theatre summer program early in his career and went on to study fine arts and Newcastle University. He currently resides in London.