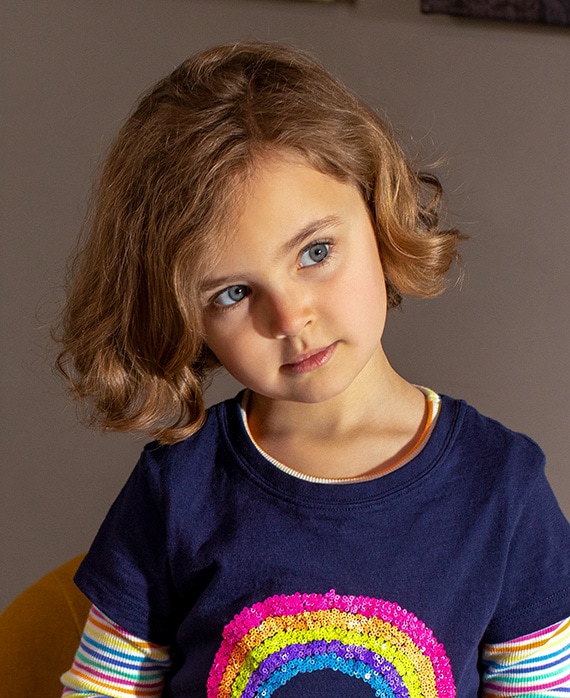 "Ava," portrayed by Jayda Eyles, is a happy, spirited and playful 4 year old who rarely lets the drama of family life affect her; focusing instead on her giraffe, videos of screaming goats and chicken nuggets.

From day one, Eyles has always been full of character, confidence, cheeky charm and bundles of energy, all things that easily led her to follow her family’s footsteps into acting and dancing. At three years old Eyles started classes in drama and ballet, adding tap, modern jazz and street dancing to her skills as she has gotten older.

Just shy of her fourth birthday, after several castings and meetings, Eyles secured the coveted role of “Ava” for the pilot of Breeders, her first acting role. A strong connection was formed early on with director Ben Palmer and then with Chris Addison, Martin Freeman, Daisy Haggard and of course her on-screen brother George Wakeman. Even at this young age, Eyles was able to take direction, memorize scripts and be natural in front of the camera. She reveled in the new experiences and loved her time onset with her new cast and crew family.

Eyles other works include a role in ITV’s six-part serial drama A Confession as “Chelsea Edwards,” Karen Edwards’ granddaughter (played by Imelda Staunton) and various commercials and stills for well-known companies such as Clarks Shoes, Very, Ford Motor Company, Holiday Inn and supermarket chain LIDL in their “Big on Christmas” 2019 stills and commercial campaign.