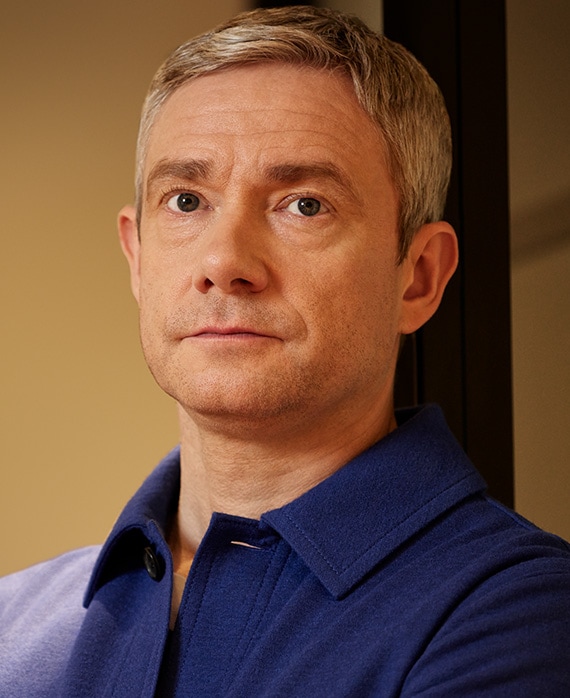 "Paul," portrayed by Martin Freeman, always thought he was a nice guy. Then he had children and realized he was impatient, angry and faced with the unenviable task of being a modern and emotionally available father without ever having experienced that kind of parenting himself.

In 2020, Freeman served as the co-creator, executive producer and star of the new FX/Sky/Avalon comedy series Breeders. He was also seen in Yuval Adler’s The Operative alongside Diane Kruger, and in David Morris’ retelling of Charles Dickens’ A Christmas Carol with Carey Mulligan, Daniel Kaluuya and Andy Serkis.

In 2019, Freeman appeared opposite Danny Dyer in A Slight Ache and The Dumb Waiter, both part of the season of Harold Punter’s one-act plays presented by The Jamie Lloyd Company. He was also seen in Jeff Pope’s ITV drama A Confession with Imelda Staunton, and the feature film Ode to Joy from Modern Family director Jason Winer and The Colbert Report writer Max Werner.

In 2018, Freeman was seen in Ryan Coogler’s critically acclaimed sci-fi drama Black Panther alongside Danai Gurira, Michael B. Jordan, Andy Serkis, Forest Whitaker, Lupita Nyong’o and the late Chadwick Boseman. He will appear in the sequel in 2022. Freeman also appeared in the big screen adaptation of Jeremy Dyson and Andy Nyman’s Ghost Stories, and the award-nominated short Cargo for Netflix with Anthony Hayes, Caren Pistorius and Susie Porter. Prior to this, Freeman reprised his role of “Dr. John Watson” in the fourth season of Sherlock on both BBC One in the U.K. and PBS in the U.S. On stage, he starred in James Graham’s comedy Labour of Love alongside Tamsin Greig at the Noël Coward Theatre.

Freeman appeared in several television productions in 2015. He starred in BBC Two’s The Eichmann Show, which was part of the BBC’s commemoration of the 70th anniversary of the liberation of Auschwitz-Birkenau.

In 2014, Freeman starred in FX’s award-winning television adaptation of Fargo, which earned him both Golden Globe® and Emmy nominations for his role as “Lester Nygaard.” He also won an Emmy for Outstanding Supporting Actor in a Miniseries or a Movie and Best Supporting Actor at the BAFTAs for his portrayal of “Dr. John Watson” in Sherlock. Later that year, Freeman was seen in theaters reprising his role of “Bilbo Baggins” in the final installment of Peter Jackson’s The Hobbit series, The Hobbit: The Battle of the Five Armies. He also took to the stage to play the title role in Richard III at the Trafalgar Studios.

One of Freeman’s most notable television credits remains his role as “Tim Canterbury” in the hugely successful and much-loved series The Office, for which he also received BAFTA nominations in 2002 and 2004.

Freeman’s film credits include the box office success Love Actually in 2003; the horror comedy Shaun of the Dead; Simon Pegg and Edgar Wright’s cult hit Hot Fuzz and The World’s End; the mockumentary Confetti alongside Jessica Hynes; and as “Arthur Dent” in The Hitchhiker’s Guide to the Galaxy.

Freeman’s stage credits include Clybourne Park and Kosher Harry at the Royal Court Theatre and Blue Eyes and Heels at the Soho Theatre.