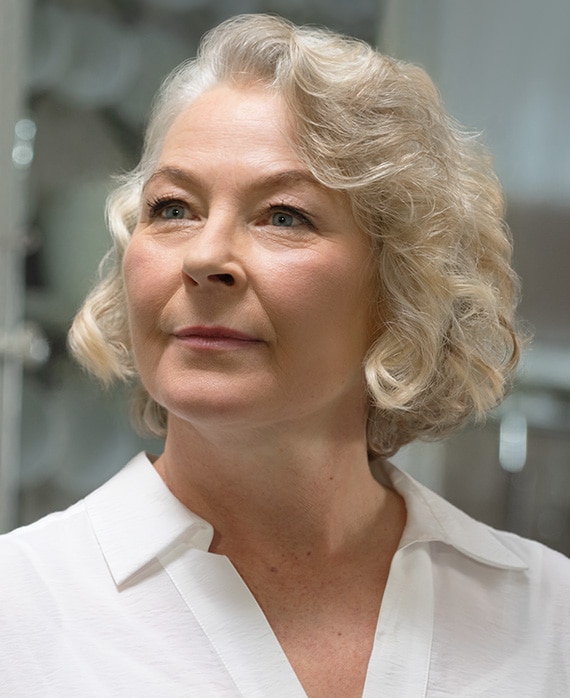 Glamorous and entirely unreliable, "Leah," portrayed by Stella Gonet, flits in and out of Ally’s life only when it suits her. The polar opposite of her daughter, they will never be able to fully understand each other.

Gonet was born in Greenock, Scotland. She attended the Royal Conservatoire of Scotland.

Her vast array of stage performances range from Ophelia to Daniel Day-Lewis’ Hamlet at the National Theatre; “Irina” in Anton Chekhov’s Three Sisters for the Royal Shakespeare Company at the West End; “Mrs. Thatcher” in Handbagged, “Kyra” in Skylight with Bill Nighy and “Miss Prism” in Importance of Being Earnest for West End and in the 2018 film adaptation.

Gonet has also appeared in the HBO film Stalin alongside Robert Duvall, Nicholas Nickleby as “Mrs. Nickleby” with Charlie Hunnam and Anne Hathaway, and 2013’s How I Live Now alongside Saoirse Ronan.

She has had a wealth of TV roles throughout her career, including “Beatrice Elliot” in the hit series The House of Elliot for three seasons, Grantchester, Humans, Foyle’s War, The Crow Road, The Crown, Man Down, Siblings and The Cry.

Gonet is married to actor Nicholas Farrell. They have one daughter and live in London.