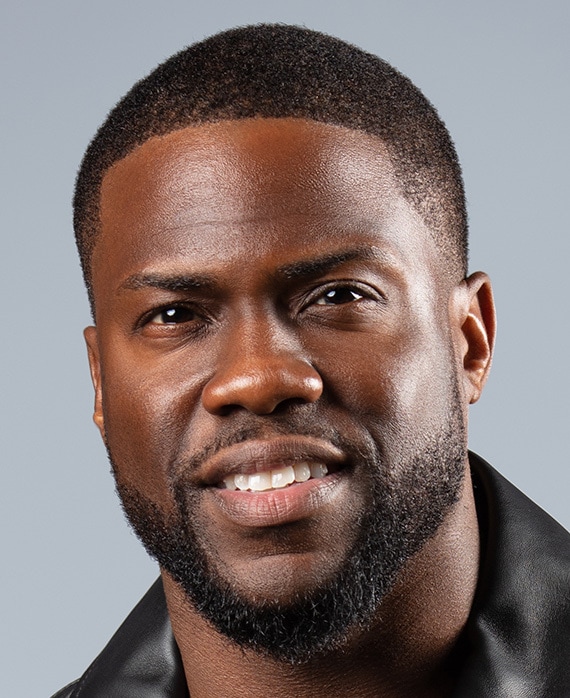 Emmy®-nominated producer Kevin Hart was born and raised in Philadelphia, Pennsylvania where he launched his career as a comedian during an amateur night at a local comedy club. Over the years, Hart has become a Hollywood powerhouse, opening 10 films at number one at the box office. Hart can most recently be seen in his newest stand-up special Zero Fu**ks Given, which quickly became Netflix's biggest stand-up special of 2020.

Hart recently wrapped filming on Sony’s action-comedy The Man from Toronto, starring alongside Woody Harrelson and Kaley Cuoco, which is slated for release on September 17, 2021. In 2020, Hart wrapped production on the film Fatherhood, which he is starring in and producing through Hartbeat Productions. Based on the bestselling book Two Kisses for Maddy, Fatherhood tells the story of a single dad navigating parenthood after his wife unexpectedly dies a day after giving birth. It is slated for release in June 2021.

In December 2019, Hart’s Emmy-nominated docuseries Don’t F**k This Up was released on Netflix. The intimate and honest six-part series follows Hart’s life over the previous year, giving viewers an inside look at the events that shaped his life. That same month, Hart was seen in theaters starring alongside Dwayne Johnson, Jack Black, Danny DeVito, Karen Gillian and Awkwafina in the sequel to Sony’s highly successful reboot of the beloved Jumanji franchise: Jumanji: The Next Level, which grossed $800 million in global revenue. In the summer of 2019, Hart reprised his role as the white-haired rabbit “Snowball” in Universal’s The Secret Life of Pets 2. Before that, he wrapped his global live stand-up comedy tour, The Irresponsible Tour, which was released as an original Netflix standup special in April 2019.

In 2018, Hart co-wrote, produced and starred in Universal’s Night School, all under Hartbeat Productions. In 2017, Hart starred in Jumanji: Welcome to the Jungle, his highest grossing movie to date. Before that, he starred in STX Entertainment’s The Upside alongside Bryan Cranston and Nicole Kidman.

Hart’s stand-up comedy tour “What Now” grossed over $100 million worldwide and culminated in a performance to a sold-out crowd at Philadelphia’s NFL stadium. Hart’s previous credits include: Central Intelligence, The Secret Life of Pets and the Ride Along films. Hart’s memoir I Can’t Make This Up debuted at number one on The New York Times bestseller list and remained in the top 10 print hardcover bestsellers list for 10 weeks straight.

Hart’s Laugh Out Loud Network serves as a platform for emerging comedians and is home to two premium series, which both feature Hart - What the Fit? and Cold as Balls. In February 2018, Hart’s Laugh Out Loud radio channel 96 premiered on SiriusXM with Hart hosting alongside longtime friends and fellow comedians, The Plastic Cup Boyz. In April 2019, their featured talk show Straight from the Hart became available on Pandora and ranked as the number one podcast across all genres.