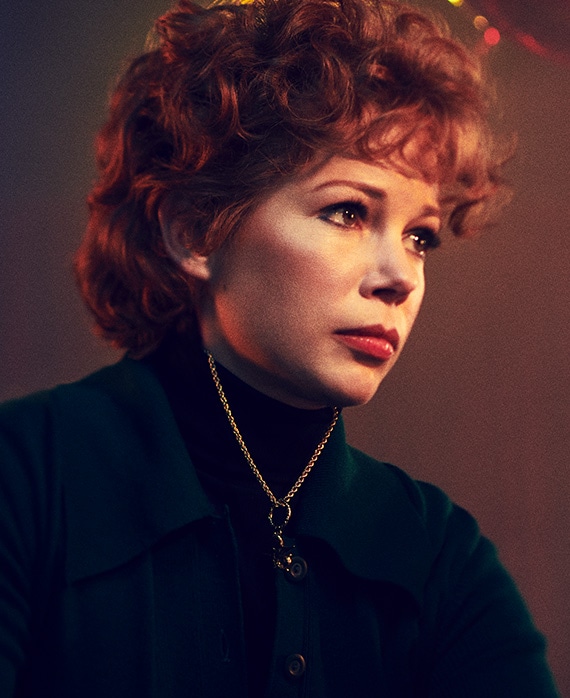 Quite simply the greatest Broadway dancer of the twentieth century, Gwen Verdon, portrayed by Michelle Williams, grew up – like Bob – performing in burlesque shows as a child, before she went on to an early career with famed choreographer Jack Cole. Gwen soon found fame on Broadway – where she met her lifelong collaborator and second husband, Bob Fosse.

Once a household name, Gwen will find herself increasingly in Bob’s shadow, her pivotal role in his work too often overlooked and unappreciated. While Bob’s star as a director begins to rise, Gwen watches her own celebrity fade, a victim to changing tastes and the entertainment industry’s cult of youth. As her husband’s volatility and philandering make their marriage increasingly untenable, Gwen will struggle to break away from Bob and build her own identity, but again and again, the two will be drawn back together, bound equally by love and ambition.

Michelle Williams' performances have established her as one of Hollywood's most sought-after and respected actors, earning her five Golden Globe® nominations and one win, a Tony® Award nomination and four Academy Award® nominations.

Williams was recently seen in Bart Freundlich’s After the Wedding alongside Julianne Moore. The film premiered at the Sundance Film Festival.

This past year, Williams was seen starring opposite Tom Hardy in the Marvel film Venom, playing the role of “Anne Weying.” Venom broke box office records this past October and made over $855 million at the global box office. Additionally, Williams starred opposite Amy Schumer in the romantic comedy, I Feel Pretty and Ridley Scott’s All the Money in the World, opposite Christopher Plummer and Mark Wahlberg, for which she earned a Golden Globe Nomination for Best Performance by an Actress in a Motion Picture.

Previously, Williams starred in Kenneth Lonergan’s Academy Award nominated Manchester by the Sea, opposite Casey Affleck. For her performance, she was nominated for an Academy Award, Golden Globe Award, Screen Actors Guild Award, BAFTA Award and Critics’ Choice Award for Best Supporting Actress. Williams also starred in The Greatest Showman, opposite Hugh Jackman which became a box-office smash, garnering over $430 million at the global box office and a soundtrack that topped the charts.

In her first collaboration with Kelly Reichardt in the critically acclaimed independent film Wendy and Lucy, Williams' performance as "Wendy" garnered a Toronto Film Critics Award for Best Actress in 2009 and her third Independent Spirit Award Nomination. 2010 marked Williams’ second collaboration with director Kelly Reichardt in the period drama Meek’s Cutoff, which won the Producers Award at the 2011 Independent Spirit Awards as well as the SIGNIS Award at the 2010 Venice Film Festival. Williams’ third collaboration with Reichardt, Certain Women, premiered at the 2016 Sundance Film Festival to rave reviews, and was released by IFC Films. Certain Women received the BFI London Film Festival’s best film award.

Williams' other film credits include Martin Scorcese's Shutter Island, OZ: The Great and Powerful, Suite Française, Incendiary, Take This Waltz, Synecdoche, New York, I'm Not There, Land of Plenty, The Hottest State, The Station Agent, Me Without You and Andrew Fleming's Dick. In 2005, Williams was honored by the Motion Picture Club as "Female Star of Tomorrow."

On television, Williams starred opposite Chloë Sevigny in Martha Coolidge's HBO movie If These Walls Could Talk 2. She also had a six-year run as "Jen Lindley" on the WB's hit television series Dawson's Creek. The series premiered in 1998 and remained one of the WB's top-rated shows throughout its run.

On stage, Williams was most recently seen on Broadway starring in Olivier Award-winning Drama Blackbird opposite Jeff Daniels. Her depiction of “Una” garnered her a Tony nomination for Best Performance by an Actress in a Leading Role in a Play. She made her Broadway debut as “Sally Bowles” in the recent Roundabout Theatre Company production of Cabaret. Her previous theater credits include the Off-Broadway productions of Smelling A Rat, Killer Joe and the Williamstown Theatre Festival production of The Cherry Orchard.
See All Shows