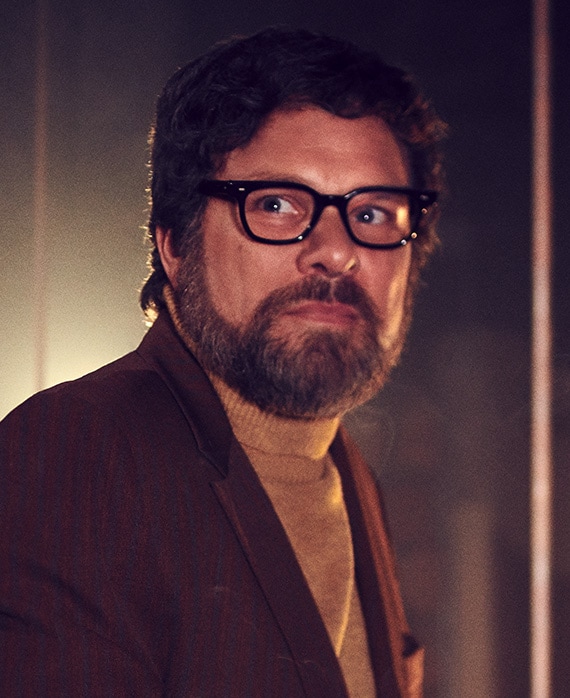 A brilliant playwright and screenwriter, Paddy, portrayed by Norbert Leo Butz, is one of Bob’s few true friends, a force of nature who never shies away from telling the painful truth. When he speaks, Bob listens. But even Paddy will struggle to get through to his friend as his behavior, and his appetites, grow increasingly out of control.

Norbert Leo Butz is a multi-award-winning actor whose talents span across television, film and theater. Most recently, Butz starred in the critically acclaimed Netflix series Bloodline. He also starred in Mercy Street, the PBS medical drama, and had starring roles in the series The Deep End (ABC) and the miniseries Comanche Moon (CBS) as well as the pilots The Miraculous Year (HBO) and Playing Chicken (FOX).

The extremely versatile Butz won his first Tony Award® for his performance as “Freddy Benson” in the Broadway production of Dirty Rotten Scoundrels, a role that also earned him a Drama Desk Award, an Outer Critics’ Award, an Astaire Award and a Drama League Award for Best Actor in a Musical. He garnered his second Tony Award and a Drama Desk Award for his performance as “Carl Hanratty” in Catch Me If You Can. Butz’s other Broadway credits include Big Fish, Dead Accounts, Enron, Speed-the-Plow, Is He Dead?, Wicked, Thou Shalt Not, for which he earned Tony, Drama Desk and Outer Critics’ nominations, and Rent.

Butz participated in the producing, writing and recording of The Angel Band Project’s album, “Take You With Me” (now available on iTunes), for which all proceeds benefit the Voices and Faces Project. He received a BFA from Webster University and an MFA from Alabama Shakespeare Theatre.