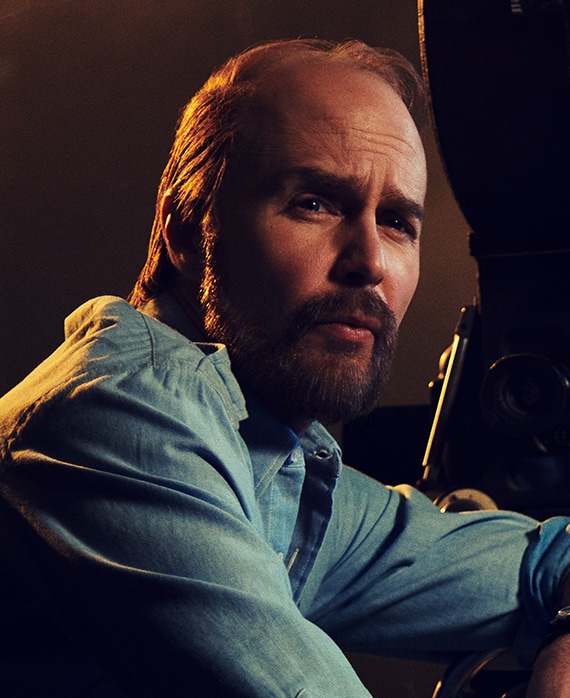 Coming of age as a dancer in Chicago’s burlesque houses, Bob Fosse, portrayed by Sam Rockwell, always dreamed of being Fred Astaire. When his career as a dancer in Hollywood fails to take off, Bob finds a second act as a Broadway choreographer. It is only when he meets Gwen Verdon, though, that his talents truly blossom.

Through a series of groundbreaking shows together, Bob and Gwen will reshape musical theater, as Bob transforms the choreographic vocabulary he first learned in the tawdry burlesque houses of the 1930s into his own singular aesthetic. Eventually, he will bring his unique vision to cinema, becoming one of the most acclaimed filmmakers of his generation. But Bob’s success will come at a terrible personal cost. Driven by a relentless need for perfection, and haunted by the demons of a troubled childhood, Bob will spend his life caught between his aspirations to greatness and the seemingly irresistible pull toward self-destruction.

Academy Award® winner Sam Rockwell has established himself as one of the most versatile actors of his generation with an array of emotionally searing and complex roles defining his body of work.

Rockwell won the Academy Award, Screen Actors Guild Award, Golden Globe®, BAFTA, Critics’ Choice and Independent Spirit Award for Best Supporting Actor for his performance in Three Billboards Outside Ebbing, Missouri opposite Frances McDormand. He was also nominated for, or won, more than 37 critics groups globally for his portrayal of “Officer Dixon,” a bad cop who stumbles towards redemption as he tries to help “Mildred” (McDormand) avenge her daughter’s tragic murder.

He was recently seen in VICE opposite Christian Bale and Amy Adams directed by Adam McKay for which he’s garnered an Academy Award nomination and Golden Globe nomination for Best Actor. Next, he will appear in the upcoming film The Best of Enemies opposite Taraji P. Henson and will star in the animated film The One and Only Ivan opposite Angelina Jolie and Bryan Cranston.

Rockwell is known for his leading performances in an array of noteworthy films including George Clooney’s Confessions of a Dangerous Mind, for which he received a Silver Berlin Bear Award for Best Actor at the 2003 Berlin International Film Festival, Ridley Scott’s Matchstick Men and Seven Psychopaths opposite Woody Harrelson, Colin Farrell and Christopher Walken, which earned him a 2013 Film Independent Spirit Award nomination for Best Supporting Male. This was followed with a 2014 Critics’ Choice nomination for Best Actor in a Comedy for his performance in The Way, Way Back.

He has appeared in a number of Broadway productions, including Sam Shepard’s Fool for Love and A Behanding in Spokane opposite Christopher Walken, as well as Stephen Adly Guirgis’ The Last Days of Judas Iscariot and Mike Leigh’s Goose-Pimples Off-Broadway. His love for theater first began while performing multiple productions at the Williamstown Theatre Festival including A Streetcar Named Desire, The Dumb Waiter and the revival of Lanford Wilson's long-running Off-Broadway hit, Hot L Baltimore.