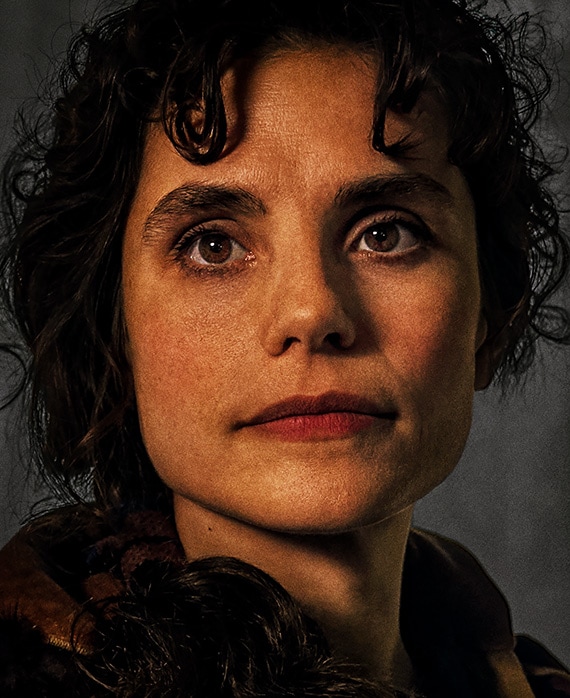 "Lottie," portrayed by Charlotte Riley, was "Scrooge’s" elder sister. Was, because she is dead. Or was dead, because now she has sent herself back to the world of the living to try her turn at saving Scrooge’s hardened soul. With fire and love and anger in her heart she will force Scrooge to see difficult truths.

Riley is one of Britain’s most talented actresses. Working across film and television, Riley has developed an impressive resume, acting in a variety of roles and working with notable filmmakers and talent.

2019 is set to be a standout year for Riley. She will soon return to the small screen in the adaptation of the Charles Dickens classic A Christmas Carol for FX and BBC One. Riley will star as “Lottie,” Scrooge’s sister and the "Ghost of Christmas Present."

In 2018, Riley appeared in the feature film Swimming with Men, alongside Rob Brydon, Jim Carter, Thomas Turgoose and Rupert Graves. Riley was also seen in Press, a six-part co-production with Masterpiece for BBC One. She also appeared in FX’s Trust alongside Donald Sutherland, Brendan Fraser and Hilary Swank.

On the big screen, Riley appeared in London Has Fallen starring Gerard Butler and was featured in the Ron Howard film, In the Heart of the Sea starring Chris Hemsworth. She also appeared in the Tom Cruise and Emily Blunt blockbuster The Edge of Tomorrow, directed by Doug Liman.

In 2009, Riley tackled the universally known role of “Catherine Earnshaw” in an ITV adaption of the Emily Bronte novel Wuthering Heights. She starred opposite Tom Hardy as “Heathcliffe.”

Along with fellow actor Sarah Solemani, Riley is the co-founder of Ready Set Play, an initiative that strives to support working parents within the film industry with childcare, consisting of a renovated double decker bus that opens to create a fully inspected nursery.